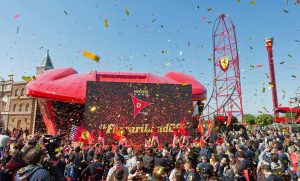 The new $1.1 million (€1 million) theme park is part of PortAventura World, yet separate from the adjacent PortAventura Park. So guests can purchase tickets for one park or both, similar to the two Disney parks in Anaheim, California and the Universal parks in Orlando, Florida.

The first amusement park themed to the Italian auto giant was Ferrari World in Abu Dhabi, which opened in 2010.

Read and view more photos and videos in our Forum Discussion.