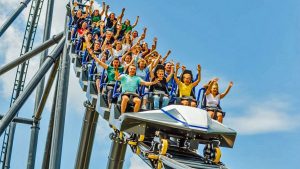 In October 2016, Energylandia released a pair of animated videos of proposed mega coasters from Intamin and Vekoma on their Facebook page asking followers to vote on which they preferred and in November that year the park announced they would going with the Intamin design.

Hyperion is the park’s twelveth coaster to open since 2014, Energylandia’s first year of operation, making it the Continent’s fastest growing theme park. Two further coasters are scheduled to open in 2020.

See what our members are saying about the park’s latest addition in our Forum discussion.