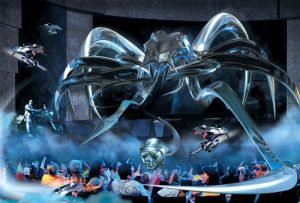 October 8, 2017 – After 21 years of operation, Terminator 2 3D at Universal Studios Florida is hosting its last shows today. Like many of the park’s other classic attractions over the years: Back to the Future The Ride to The Simpsons Ride; Jimmy Neutron’s Nicktoon Blast to Despicable Me Minion Mayhem; Jaws to Harry Potter and the Escape from Gringotts; Twister Ride It Out to Race Through New York Starring Jimmy Fallon; Disaster A Major Motion Picture Ride and Beetlejuice’s Graveyard Revue to next year’s Fast & Furious Supercharged; T2 Battle Across Time will be making way for a all-new live-action experience based on a high-energy Universal franchise coming in 2019.
This leaves only E.T. Adventure, the park’s oldest attraction, unaffected by the park’s ruthless constant state of self-reinvention to bring the biggest and most technically-advanced attractions to the park – even as the entire area around it is being demolished to make room for Super Nintendo World.
The Universal Studios Hollywood version of Terminator 2 3D was replaced with Despicable Me Minion Mayhem in 2012, leaving Universal Studios Japan as the only park where it’s still up and running.

Read more and see what our members are saying in our Forum Discussion.