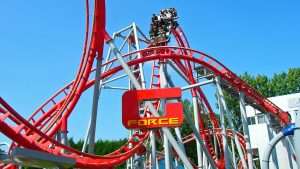 October 10, 2018 – Drayton Manor confirmed the rumors of the immediate retirement of G Force, the park’s Maurer X-Car coaster. There is currently no specific date for the ride to be removed or details of any new attraction to replace it.

G Force features a drop out of the station into a beyond vertical lift hill called the Humpty Bump Lift and three inversions, two of which are part of a coaster element called a Bent Cuban Eight, which is unique to this type of coaster. It was the only X-Car coaster in the UK and one of only two coasters of its kind. The other is Dream Coaster at Dream City in Iraq.

See what our members are saying about the coaster’s retirement in our Forum discussion.