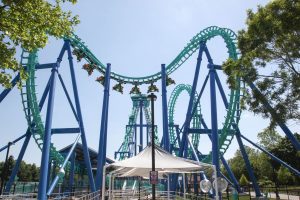 December 17, 2017 – Dorney Park announced it will be removing Stinger, its Vekoma Inverted Boomerang coaster. Stinger opened as recently as 2012, brought in from California’s Great America where it had been in service between 1998 and 2010, under the name of Invertigo. In a blog post, Dorney Park states that Stinger was removed to make room for “future planning opportunities”, but that there are no more details to be shared at this time.

This is the second time in ten years Dorney Park has cleared this piece of land. It previously housed a Schwarzkopf looping coaster named Laser, which was brought to Dorney Park in 1986 and removed after the 2008 season. Laser was sold to a German showman, that renamed it to Teststrecke, and it’s traveling the country’s fair circuit after a complete refurbishment.

While it is not uncommon for parks to remove coasters to make room for future development, it is rare for the newest coaster in the park to be get the axe. The reasons why Stinger had to go so soon are unclear, but it may be related to reliability, guest popularity, or it could have been intended as a temporary replacement for Laser from the beginning.

Stinger sat in a corner of the park next to Possessed, an Intamin Impulse coaster, with plenty of room for expansion and far enough away from neighbors, so noise complaints is not an issue. Were there greater plans for the site after Laser’s removal that may only now be realized? Or are Dorney Park simply getting rid of an unreliable coaster that didn’t draw much ridership?

See what our members think about Stinger’s removal on our Forum discussion.