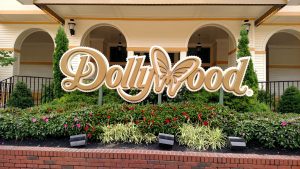 December 21, 2017 – Huge tracts of land are being cleared in Dollywood, the largest amusement park in Tennessee. Reports indicate that forest has been cut down and the terrain leveled in a substantial area behind Wild Eagle, the B&M Wing Coaster the park built in 2012. While the park has not issued a press release yet, it is being speculated that the clearing is making room for a new park area. The cleared land lies in the center of the park, on a hill which previously has not been developed. While busy construction activity has been reported, the area is not likely to be completed in time for the 2018 season.

Dollywood opened in 1961 under the name of “Rebel Railroad”, but went under several other names in the 1970s and ’80s. Country music artist Dolly Parton bought a controlling share in the park in 1986, a move which also gave the park its current name. It is currently the most visited ticketed tourist attraction in Tennessee. The park contains eight roller coasters, four of which have been built since 2012.

See what our members think about the development in our Forums.