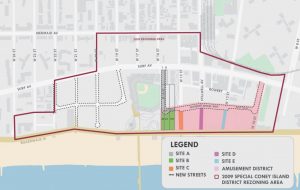 February 7, 2017 – In another step toward the new Coney Island envisioned under the 2009 rezoning, New York City’s Department of Parks & Recreation released a request for proposals, or RFP, for the creation and operation of new rides, games and other attractions for the empty lots between the Cyclone roller coaster and the MCU minor league baseball park.
The RFP includes 150,000 square feet of space on five vacant parcels along the boardwalk between West 10th and West 16th Streets (depicted in grey, green, orange, purple and blue on the map). The city plans to lease the sites for 10 years and is hoping the new amusements will be opened by summer 2018. Developers would be responsible for repairing roads and infrastructure, as well as operating the amusements, according to the proposal request. Proposals are due on March 17th.

“Coney Island just keeps getting better,” the new NYCEDC President and Chief Executive Officer James Patchett said in a prepared statement. “The de Blasio administration is working to grow jobs in the amusement district, build affordable housing and invest in critical infrastructure. It’s all part of our effort to improve quality of life and expand opportunities for Coney Island residents while preserving the unique culture of this historic destination.”

Read more in our Forum discussion.