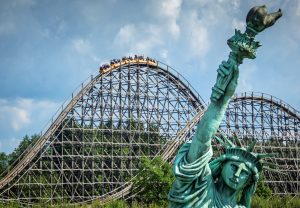 January 11, 2018 – The fate of the Intamin wooden roller coaster Colossos at Heide Park has been uncertain since it suddenly closed in the middle of the 2016 season. Last autumn, it was revealed that the reason for the closure was severe material degradation, and that repair costs were estimated to exceed 10 million Euros ($12 million). The high repair costs led many fans to fear that Colossos would never reopen, but Heide Park announced today that the coaster will be refurbished, re-tracked, and reopen for the 2019 season. The total investment in the re-fabrication will be 12 million Euros ($14.7 million), while it originally cost 21 million Euros ($25.6 million) to build in 2001. Despite the recent popularity of steel-hybrid track conversions of large wooden coasters (spearheaded by Rocky Mountain Construction), it’s reported that Colossos will remain a conventional wooden coaster after retracking.

Colossos, which was built in 2001, was the first “Plug’n’Play” coaster with prefabricated track made by Intamin AG. The coaster is 164 feet (50m) tall and reaches a speed of 68.4mph (110km/h), making it Europe’s tallest and fastest wooden coaster at the time of its opening. Colossos currently stands as the world’s third tallest and fastest conventional wooden coaster, rivaled only in size by its Plug’n’Play brethren T-Express at Everland in South Korea and El Toro at Six Flags Great Adventure in New Jersey, USA. Despite raving receptions from enthusiasts and high popularity with park visitors, only four Plug’n’Play wooden coasters were ever built. The fourth and smallest is Balder at Liseberg in Sweden. Colossos is the only one of the four reported to have suffered this type of damage.

Follow the announcements and reconstruction of Colossos in our Forum Discussion.