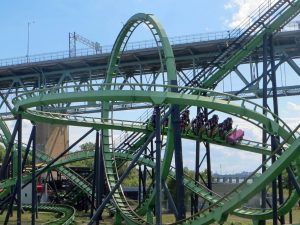 May 19, 2017 – La Ronde have removed Cobra from the park map as well as the website’s list of rides and told employees that it would not run again at the park. The Intamin standup coaster was relocated to La Ronde in 1995 from Skara Sommarland in Sweden, where it was first ran from 1988 to 1994. With the ride’s removal, Shockwave at Drayton Manor in Staffordshire, England, remains the only Intamin standup coaster in operation.

Only three Intamin standup coasters were built before the lead designers on the standing coasters left to form B&M (Bolliger and Mabillard) in 1988. The first was also called Shockwave and operated at Six Flags Magic Mountain from 1986 to 1988 before moving to Six Flags Great Adventure from 1990 to 1992 and then to Six Flags AstroWorld from 1993 to 2005.

Check out our Coaster Type page for more information about Standup coasters.