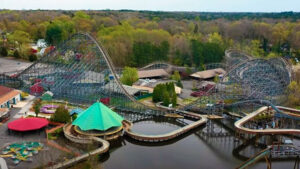 February 16, 2021 – Clementon Park and Splash World, which closed suddenly near the end of the 2019 season, is going to be auctioned off soon, either in parts or as a whole.  The park is now offered on Capital Recovery Group’s website, as it appears the park defaulted on a bank loan which means it will now be sold to recover as much of the loan amount as possible.  The company will hold an inspection day on March 19th for potential buyers, and the actual auction will take place on March 23rd.

The park was purchased by Premier Parks, LLC toward the end of 2011, and operated each year until the closure in September, 2019.  The coronavirus pandemic set in at the start of the following year and the park has remained closed since, which left Premier Parks without any potential buyers.

The video below gives a good view of the park from it’s drop tower.

See what our members are saying about the park’s closure and the upcoming auction in out Forum discussion.