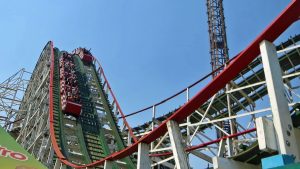 “Due to the quality of documentation, conceptual proposal and thematic content presented, this company has the technical, financial strength and operational capacity that the project requires,” officials stated.

Mota Engil México is a nonresidential building construction company that is currently working on the construction of the first section of the Mayan Train in southern Mexico, so it looks like they do more than what’s listed in the company profile. Stipulations of the contract states that the companies must fully guarantee “the quality, safety and environmental sustainability of all components , equipment and rides, especially the mechanical ones,” but not Montana Russa (video below), the park’s dueling wooden coaster that opened in 1964. The coaster was deemed to have suffered from neglect too long and will be removed.

Two men, aged 18 and 21, died last September when the wheel assembly of the last car came apart on the “La Quimera” Schwarzkopf triple loop coaster, causing the car to fishtail and derail. Two women were also seriously injured, so the capital authorities decided to revoke the concession and start a new bidding process. The coaster has since been dismantled and sold to Indiana Beech in the USA, where it’s scheduled to open in 2021.

See what our members are saying about the park, accident, new owners group and the coaster removal in our Forum discussion.