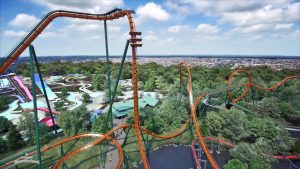 In addition to the usual three second hold at the top of the drop, the layout will feature two Immelmann inversions, a dive loop, a 360° helix and a vertical loop, which has never been seen before on a dive coaster.

The new coaster will be located in Frontier Canada, a new themed area that’s been planned for the park since it opened in 1981. In addition to Yukon Striker, other themed attractions such as Lumberjack, Flying Canoes, and Soaring Timbers, with exiting rides Mighty Canadian Minebuster, White Water Canyon, Timberwolf Falls, and Vortex will also be joining the new area.

See what our members are saying about the park’s exciting new addition in our Forum discussion.