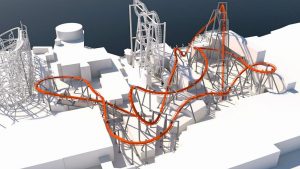 The compact waterfront park has many attractions built on top of one another, including three intertwining coasters, but the addition of a eighth coaster of this size seemed unlikely. However, park Rides Manager Peter Osbeck has worked with B&M to design the layout around Insane, the Intamin ZacSpin coaster, with an underground station and a lift hill extending over the Biergarden in order to squeeze it in.

Gröna Lund is already in the process of building Ikaros, 312 foot (95m) tall Intamin Sky Jump downward facing drop tower, scheduled to open in April. The drop tower’s building permit however is currently being debated in the Swedish courts, after the planning investigation was found to not properly consider noise pollution from the ride. This comes on the heels of Wildfire at Kolmården, further north in Östergötland, Sweden, which too has been in hot water over planning and building permits. Subsequently, Gröna Lund is being careful to receive all proper planning and building permits for the new coaster before proceeding.

Read More in our Forum discussion.