The Sky Rocket II model launch coaster has become a popular installment at parks in recent years. The first one built was Superman Ultimate Flight at Six Flags Discovery Kingdom in 2012 at Six Flags Discovery Kingdom in California, since then seven more have been built and Tigris will make it nine. Busch Gardens Tampa Bay’s sister park, Busch Gardens Williamsburg, received a Sky Rocket II called Tempesto in 2015 (Click the link for a POV video of Tempesto at CoasterForce’s YouTube channel). The coaster type is famed for its “volley launch”, where the train is launched out of the station halfway up the first slope. It then rolls back and gains more speed in a reverse launch, before rolling forwards again and finally gaining enough speed to crest the first hill and complete the layout. This arrangement allows for a coaster of very high speed and height on a very small footprint. 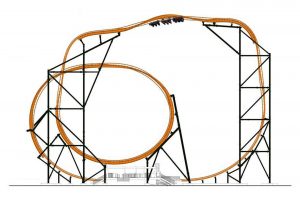 Additionally, the park gave a hint at the future of its wooden coaster Gwazi at the same press conference. The dueling GCI coaster Gwazi was closed in 2015 and has been standing in disrepair since. After announcing Tigris, the park’s project manager for design and engineering, Andrew Schaffer, stated that Gwazi would receive a makeover in 2020. No new details are available at the moment, but Schaffer used the terms “hybrid attraction announcement” and “rocky ride” during his short speech. This lead many to speculate that a makeover by Rocky Mountain Construction is in the works. In the past few years, RMC has made several highly successful makeovers of older wooden coasters at parks across North America. Most notably – and recently – the conversion of Cedar Point’s Mean Streak into Steel Vengeance, which opened to rave reviews earlier this year. If such a conversion is in the works for Gwazi, it would certainly be a solid addition to Busch Gardens Tampa Bay’s attraction lineup.

Read more about the news from Busch Gardens Tampa Bay in our Forum discussion.