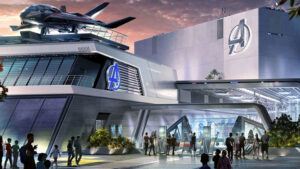 January 6, 2021 – Disneyland Resort has confirmed that Avengers Campus will open at Disney California Adventure this year that will see Spider-Man swinging across the sky, Doctor Strange conjuring up magic spells and Captain America fighting villains along rooftops.

The first phase of the new area will open with a Spider-Man dark ride, Doctor Strange special effects show, Ant-Man and the Wasp restaurant and Marvel character meet-and-greets and rooftop shows. A second phase will open at an unannounced date with an Avengers E-ticket attraction.

The backstory for the new Marvel land envisions Avengers Campus as a training ground for a new generation of superheroes. The new Web Slingers: A Spider-Man Adventure attraction will use gesture-recognition technology that will track the body and eye movements of riders as they sling virtual webs from their wrists at escaped spider-bots.

Doctor Strange will host an outdoor stage show that is expected to use special effects and projections to simulate the ruined remains of his crumbling Sanctum Sanctorum.

The new land’s Pym Test Kitchen, themed to Ant-Man and the Wasp, will serve food that has been shrunk or expanded in size. The Pym Tasting Lab outdoor cocktail bar will be attached to the restaurant near the center of the new Marvel themed land.

In September, Disney designated Avengers Campus as a “priority project” amid $700 million in budget cuts in the company’s theme park division. However, the key remaining question is whether Avengers Campus will debut when DCA reopens or will Disney wait until COVID-19 concerns subside and consumer confidence rebounds?

Rolling out a new themed land as soon as California theme parks can reopen may not make much sense. The point of a new attraction is to drive attendance, something Disneyland and DCA could be trying to avoid amid state-mandated capacity limitations and visitors’ reluctance about returning to theme parks.