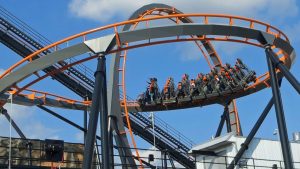 August 17, 2018 – Six Flags America announced that their B&M (Bolliger & Mabillard) standup coaster, Apocalypse: The Last Stand, will be closing for good on September 8th, 2018. Credited as B&M’s first coaster, Apocalypse got its start as Iron Wolf at Six Flags Great America near Chicago, Illinois where it opened in 1990 before being relocated to Maryland.

“Our wheels are always turning when it comes to new and innovative thrills and attractions to bring to the park,” said Park President Rick Howarth. “The end is near but saying good-bye to Apocalypse will allow us to bring an all-new thrilling experience to our guests in 2019.”

Having opened in 2012, the coaster is relativity new compared to the vast majority of rides in the park. That along with Howarth’s statement of a new experience rather than a new coaster, has led to speculation that the coaster will be converted from a standup to a floorless model. This has been done in the past when Mantis at Cedar Point in Sandusky, Ohio was converted to Rougarou in 2015. We’ll find out if this is the case on August 30th when the Six Flags parks make their 2019 attraction announcements.

See our member’s reaction to the announcement in our Forum discussion.