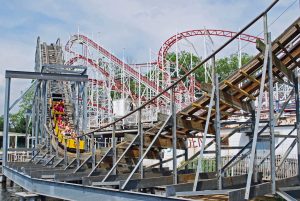 February 18, 2020 – Sad news for coaster lovers, especially for those who like wooden ones. Apex Parks Group is closing their two large amusement parks – Indiana Beach in Monticello, Indiana and Fantasy Island in Grand Island, New York. Although they might not have been world class parks, they were home to nine operating coasters, including four CCI (Custom Coasters International) woodies. Indiana Beach opened nearly a century ago in 1926 and Fantasy Island in 1961.

Apex Parks Group bought Indiana Beach in 2015 from Morgan Recreation Vacations of New York and acquired Fantasy Island the following year from Martin DiPietro, who purchased the park in 1994. Indiana Beach hadn’t seen a major new attraction since Steel Hawg opened in 2008 and the only thing Fantasy Island installed under Apex was a Wisdom Rides Dragon kiddie coaster last year. Although the parks were marginally profitable, Apex wasn’t in a position to continue to make capital improvements to the parks or rides.

Apex will disassemble the park attractions this spring and relocate some them to nine company parks in California and two in Florida, but most will be sold or scrapped. So gone from Indiana Beach will be the aforementioned Steel Hawg – the world’s first S&S El Loco coaster, while Hoosier Hurricane – the out & back woodie, Cornball Express – an airtime woodie, and Lost Coaster of Superstition Mountain – the one-of-a-kind indoor/outdoor woodie with an elevator lift, will all remain SBNO. The hybrid woodie, Silver Comet, at Fantasy Island is listed for sale.

You can click the video below to watch all 15 videos we filmed at Indiana Beach.

You can click the video below to watch the 7 videos we filmed at Fantasy Island.

See what our members are saying about this sad news and follow any updates in our Forum discussion.