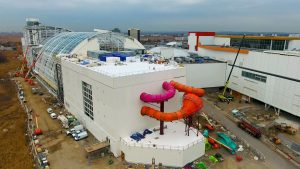 August 20, 2019 – It looks like we might have to wait a bit longer for the often delayed opening of the American Dream Mall and its Nickelodeon Universe theme park and Dreamworks water park. Triple Five Group, the developer behind the gigantic shopping and entertainment complex, is betting its other major holdings will make that dream happen. Right now the mall’s indoor theme and water parks are nearing completion, but the developer needs more money to get this project to completion.

Triple Five is now offering 49% part ownership of their Mall of America in Minnesota and West Edmonton Mall in Canada to get the $1.67 billion needed. That means there could be a delay of the proposed October 25th partial opening while the funds are secured and if the American Dream fails and Triple Five default on the loans, they would have to give up nearly half their ownership in those two malls. So let’s hope it doesn’t come to that.

Nickelodeon Universe Theme Park will have over 20 rides and attractions – featuring five roller coasters, including the world’s steepest coaster with a 121.5° drop, as well as the tallest and longest spinning coaster at 85 feet (26m) tall and 2,247 feet (685m) long, along with the tallest indoor spinning drop tower. DreamWorks Water Park will be the second largest indoor water park in the world and features 35 water slides and 13 attractions, including two surf riders from American Wave Machines, the world’s largest indoor wave pool, the longest hygro-magnetic coaster and the tallest indoor body slide at 142 feet (43m) with a 50 foot (15m) free-fall.

See what our members are saying and follow the construction of this project in our Forums discussion.