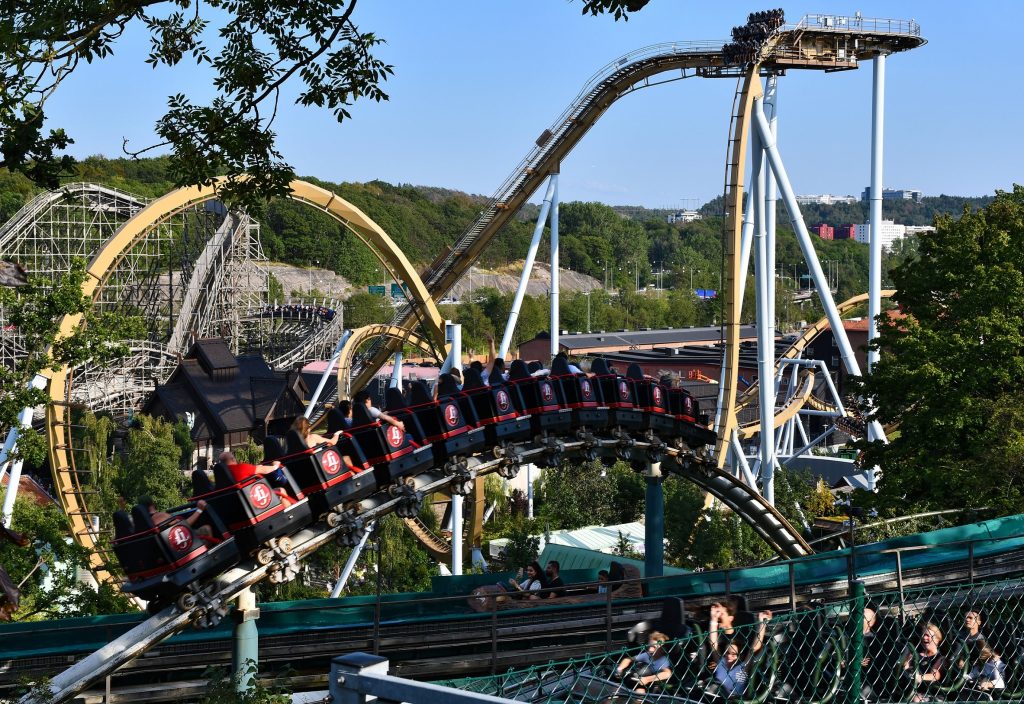 We were recently invited to spend a day with Pontus – Liseberg’s Attractions Guide. He’s the guy that gets to look after VIPs at the park, including royalty (hence taking us round, obviously). He takes guests to see all sorts of nifty behind the scenes areas and helps them ride the rides! Every enthusiast worth their salt knows what Liseberg has to offer, but our tour uncovered things we never knew!

The following article comes out of a fascinating day with Pontus, the man who seems to know everything you need to know about Liseberg. It helps that he’s also a cracking bloke!

Seatbelts first appeared on Helix in 2018 and took the form of lap seatbelts – like those you’ll find on Balder – that sat underneath the main restraint. This didn’t require any modification to the restraint itself, but it had two knock-on effects. Firstly, staff had to ‘double check’ each seat – once for the seatbelt and once for the main restraint – secondly, guests hated it. The irony of the second point, of course, is that it was guest feedback that was a primary driver for the inclusion of seatbelts in the first place!

Come 2019 and Mack and Liseberg had been busy. They’d redesigned the restraint itself to accommodate the seatbelt – like those you’ll find on Valkyria. This can be checked in one pass by the staff and doesn’t directly affect the rider.

As an interesting aside, Mack have reportedly now developed an updated restraint mechanism that utilises three independent hydraulic mechanisms (rather than the two they have currently), so they’re able to operate triple redundancy without needing a seatbelt! Always thinking about efficiency those pesky Germans…

What’s the deal? The subtle trick is that Liseberg have come to a brilliant agreement with the chocolate manufactures. The park buys the bars [nearly] at cost, to play isn’t as exorbitant as you’d usually expect in parks and winning isn’t that hard. This strategy has three clever outcomes:

1. No-one is really making a loss.
2. The manufacturers get lots of free advertising as everyone carries around a huge poster for their products.
3. You can only get these bars in Liseberg, meaning if you see someone going home on the bus carrying a big bar of chocolate you know they’ve been to Liseberg!

Lisebergbanan was nearly a Vekoma

Back when Liseberg were looking for their next coaster, they’d settled on the idea of a massive terrain coaster hugging the hillside. Vekoma had pulled together a design that the park was reasonably happy with and the final stages of design development were underway.

One day, the infamous Anton Schwarzkopf appeared at the Liseberg offices with some plans. This was the first of his Zierer collaborations after his company had gone bankrupt, and he’d taken some of his ideas and really run with it. His plans kept the coaster much closer to the terrain and required far less tree clearing (both for the ride and for construction). The park loved it, and just days later rang up Vekoma to tell them they were dumped.

The design wasn’t without flaws, and the train valleyed on the large helix bowl on its first run, meaning kicker wheels had to be added to ensure the train completes the circuit – but even today it still runs immensely well and is truly one of Liseberg’s best rides.

Lisebergbanan is one of Schwarzkopf’s finest creations and indeed is said to be his favourite. Or at least, so the story goes…

On the subject of Lisebergbanan, Liseberg have recently bought some new trains. The ride originally operated five trains, but the park did a study and found that the increased capacity gained from adding the fifth wasn’t worth the additional purchase and maintenance costs. When running four trains well the coaster is nearly optimised on capacity.

So, they decided on four trains, not five, but what about the form of the trains? Well this is where the park ran into another question. Aesthetically they wanted to keep the trains as similar as possible, but after investigating new restraint systems and magnetic brakes it turned out that changes of that magnitude would mean the ride needed to be recertified – to current regulations. This would leave the park with a massive bill, a lot of work and changes that could damage the character of the ride. They decided the right answer was to keep the new trains as close to the old trains design as possible.

Now it’s worth saying, the ride is still perfectly safe. The sort of things that these new regulations affect relate to the intricacies of controls, evacuation procedures, new structural engineering calculations and that sort of thing. Mostly paperwork exercises which come at great cost and little gain (especially when you’ve been operating the ride for nearly three decades).

The new trains are so similar, in fact, that it’s very hard to tell the difference. Other than, of course, the massively reduced downtime thanks to the brand-new hardware.

On the other end of the spectrum from the biggest rides at the park, Kaninlandet – the park’s children’s area – is a wonderful concept brilliantly delivered. The whole land is themed around the workings of the rabbit’s lives. From carrot farming to bunny entertainment, the area has it all.

For 2020 the park’s new ride, named Underlandet, will take guests on a tour of the underground world of the rabbits. You’ll visit their homes and see their lives up close and lots of other magical adventures. During construction the park have come up with a great idea of using periscopes scattered around Kaninlandet to give guests a view into the underground world. These brief glimpses of the subterranean world should get everyone nice an excited for the opening of the new ride.

The final lovely touch in Kaninlandet is the roaming mascots. Dressed in human-sized rabbit costumes, and unable to speak, the mascots tour the whole area freely. They can interact with guests, interact with the theming and scenery and even ride the rides! There’s also always a mascot out in the area, with staff taking shifts performing to give them suitable breaks, seamlessly managed by the area crews.

It’s brilliant to see a park think this well about how to engage with their younger guests. Let’s not forget, they are the enthusiasts of tomorrow!

Spokhotellet Gaston might be the prettiest scare attraction ever

(Our guides asked us not to take any pictures within the maze, so the magic remains a surprise).

The park’s year-round horror maze is a sight to behold.

We’ll try not to spoil too many things here, but let’s just say this attraction could be one of the most beautiful scare attractions in the world. Everything from the ‘sinking room’ to the ‘boiler room’ the sets are intensely immersive with every prop’s place in the story having been carefully thought out. Guests are told at the start not to touch anything, but throughout the experience there are lots of little Easter eggs to find if you do break the rules (we didn’t tell you this, but try petting the dog).

The beauty doesn’t stop at the front of house side either. We were fortunate enough to see the actors arriving in their day-to-day clothes and gradually transforming into the fully made up characters (including a session in the grotesquely named “blood room”). In the centre of their dressing room is the control centre for the attraction, with almost as many controls and CCTV cameras as the coasters. The crew take it in turns to man the controls, which provides a hilarious scene of the ride operator being in full horror make up.

The whole thing is a cleverly controlled ballet, with each actor having a headset and taking cues from scenery (for example, audio triggers to alert them to an upcoming group) and the main controller (via radio). Seeing it all unfold from behind the scenes is something else.

Balder was the second Intamin pre-fab built in 2003. It still runs amazingly well today, and this is in thanks to the wonderful ease of working with an Intamin pre-fab (not to mention Liseberg’s crack squad maintenance crews).

When a section of Balder’s track needs a bit more TLC than the crews can do on the ground, Liseberg pull up the plans for the ride and simply grab the reference code for that specific section of track – sections A2, C5 and J12 need replacing, for example.

Shoot the order form off to Intamin they fabricate a highly precise replacement piece created from laser cut laminated wood, add the special metal connectors to the ends and ship it. Then it’s a simple case of swapping out the old for the new and they’re sorted.

It’s a fantastically simple system that explains, in part, why Balder still rides so well. Especially when compared to Colossos, which has recently seen a full track replacement.

As a minor aside, when Liseberg approached Intamin for Balder they had two criteria – it must fit in the small plot of land and it must have as much airtime as possible. It’s not hard to see why Balder ended up looking like it does!

Why did the park go with a B&M Dive Coaster?

Liseberg’s decision to go for a B&M Dive Coaster was met with a slightly muted response. Following Helix four years previously, it seemed slightly like a step backwards to us enthusiasts. How could a big, safe, B&M ever live up to a rampant and chaotic Mack on a hill?

That’s not how the park saw things, however. They looked at their ride line-up and thought about what they were missing.

Valkyria is a coaster with a proper, large, feature drop. Something the park didn’t have, and B&M can provide with ease. The resulting ride took a few years to develop and had some setbacks during construction (the ground Liseberg is built on is notoriously hard to work with, especially when digging tunnels), but the brilliant gold track eventually made its way skyward.

And, for what it’s worth, Valkyria is absolutely brilliant. Probably the best European Dive Coaster and holds its own with the best in the world. But that’s just our opinion now…

When you visit Liseberg and get to spend some time relaxing in the park, it becomes very evident that they love their park. They’re very protective over their trees, they care greatly about rides on the hillside being complimentary to the landscape (that’s why the mega-coaster was modified so heavily to become Helix), they look after their rides with respect and they truly value their guests. It’s awesome to see, and Liseberg sits comfortably as one of the best parks in Europe. 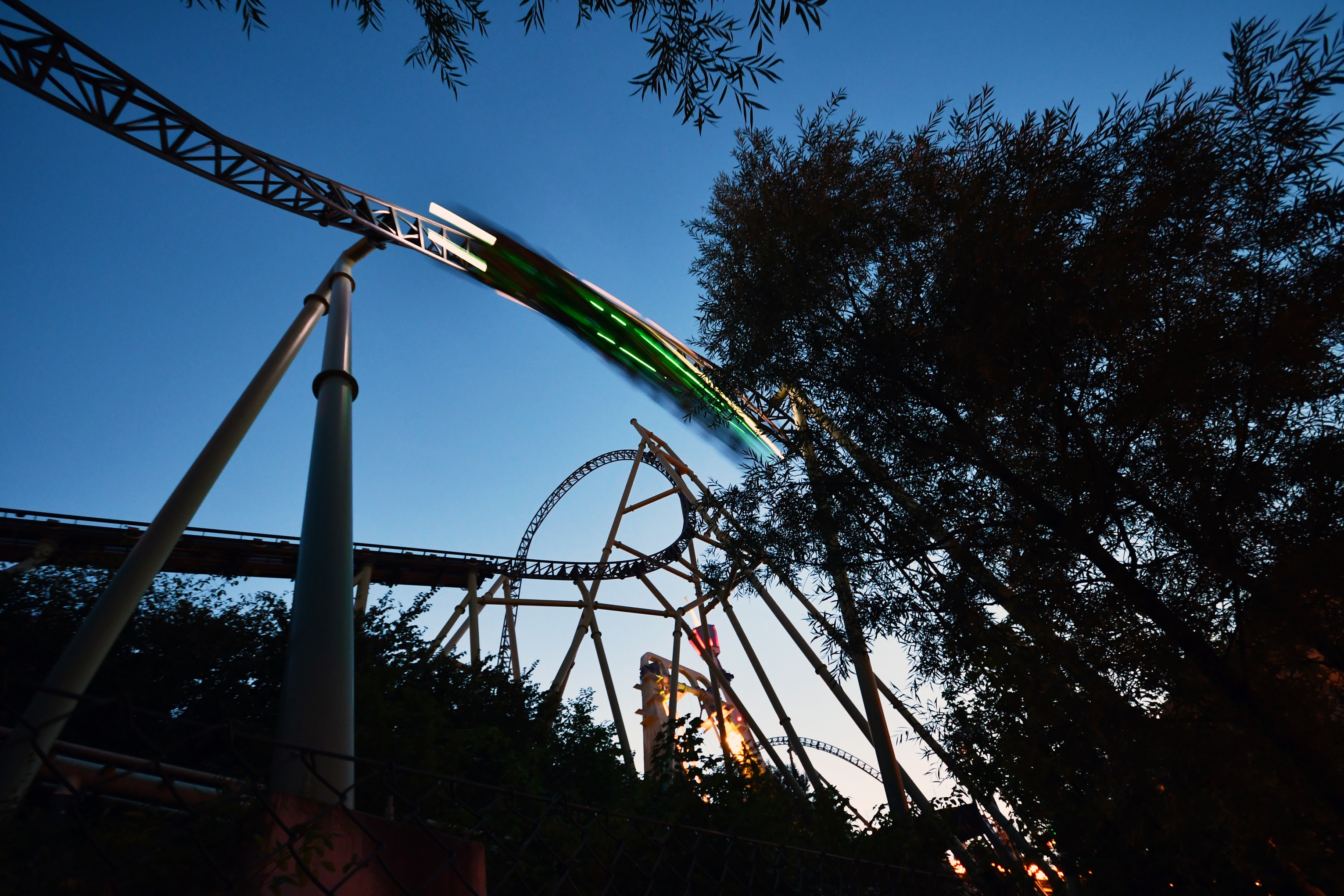 Although not related to Liseberg directly, it’s worth also noting that Gothenburg is a lovely little city. We can easily see ourselves taking a little more time during our next visit to check out more of what the city has to offer. It might be goon-blasphemy, but there is more to travelling the world than the creds!

We’d like to thank Liseberg for creating such a wonderful park for us to enjoy and Pontus for being our host for the day. Tack!