Hi guys. After a successful visit to Alton Towers earlier this month, we headed to Thorpe Park today. We left our home in Gloucestershire at just after 7am, so we got there incredibly early; we were in the car park a solid 30-40 minutes before the park opened, and due to this, I was pleasantly surprised to see that the horror stories I’d heard of people queueing for 90 minutes to enter the park were not applicable to our scenario today, as we walked straight into the security station and entered the park quickly: 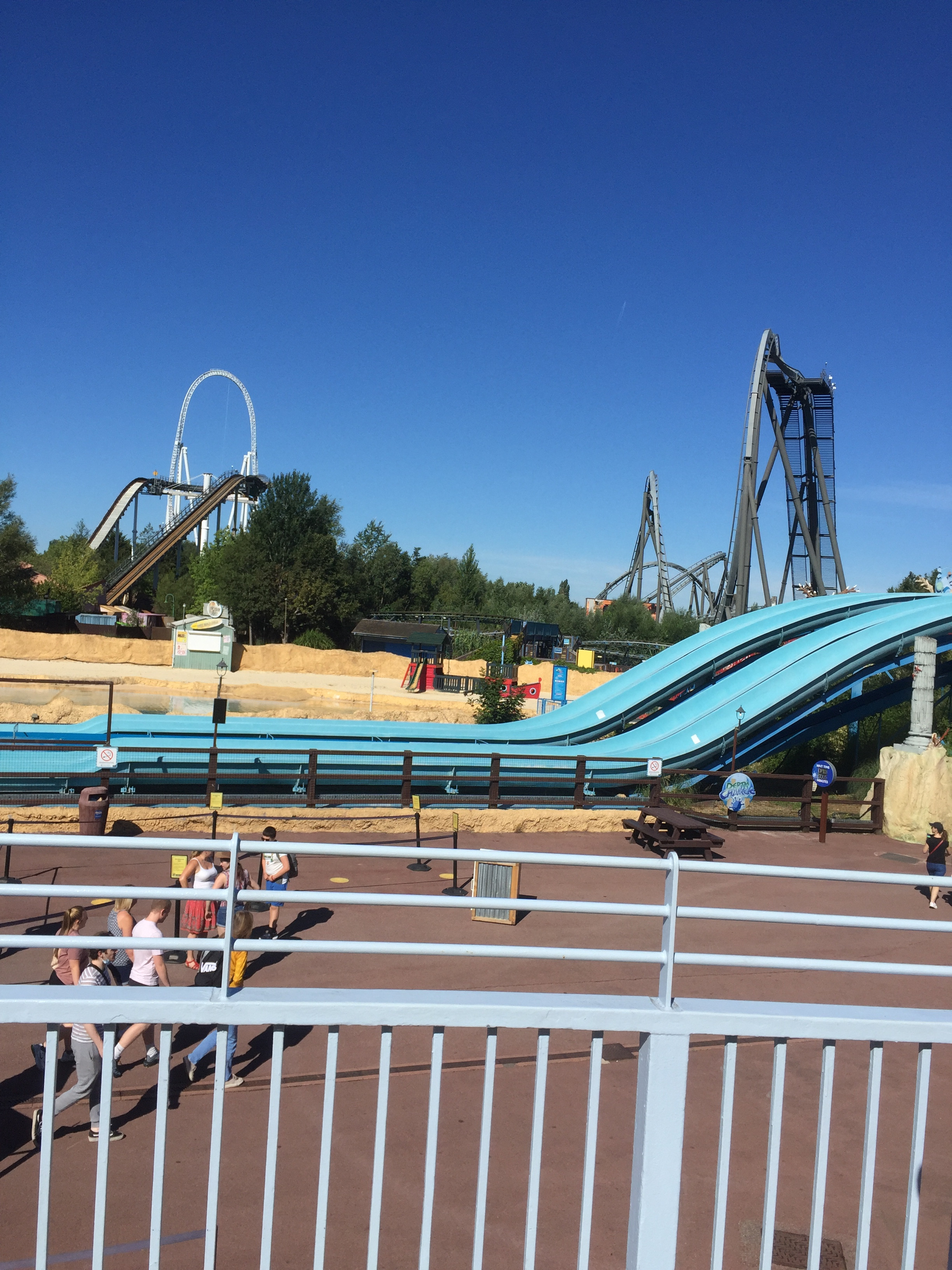 After a prompt, early entry into the park, we headed to our first ride...
Nemesis Inferno
Nemesis Inferno had a 5 minute queue, so we were on very quickly; a good start to the day! So, how was the ride? Well, we were on row 5, and it was really, really good; fast, smooth and fun, which is all I can really ask for from this type of ride! I’m in a minority who actually prefers this to the original Nemesis at Alton Towers, although perhaps not by as large of an amount as I’d first thought: 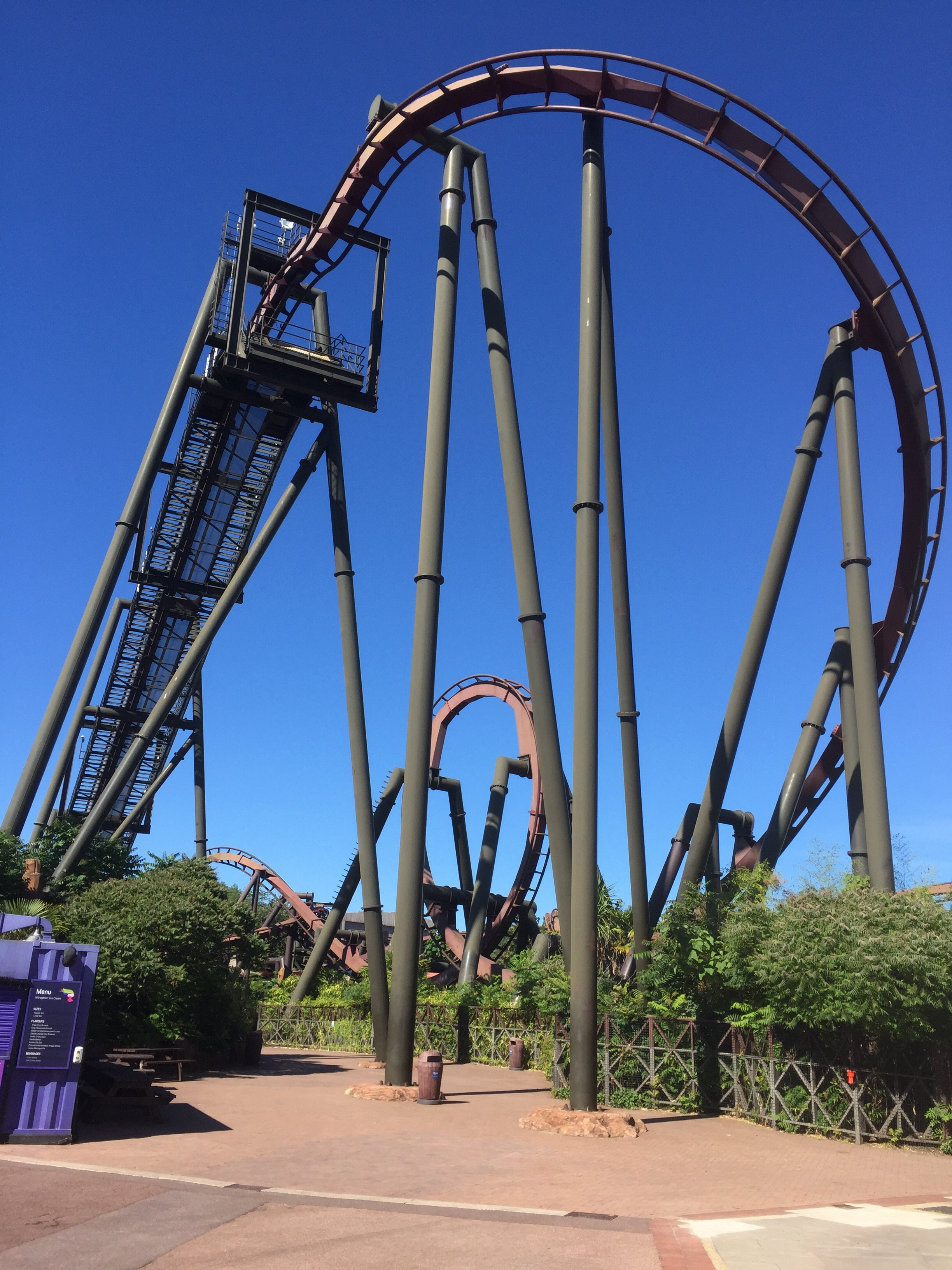 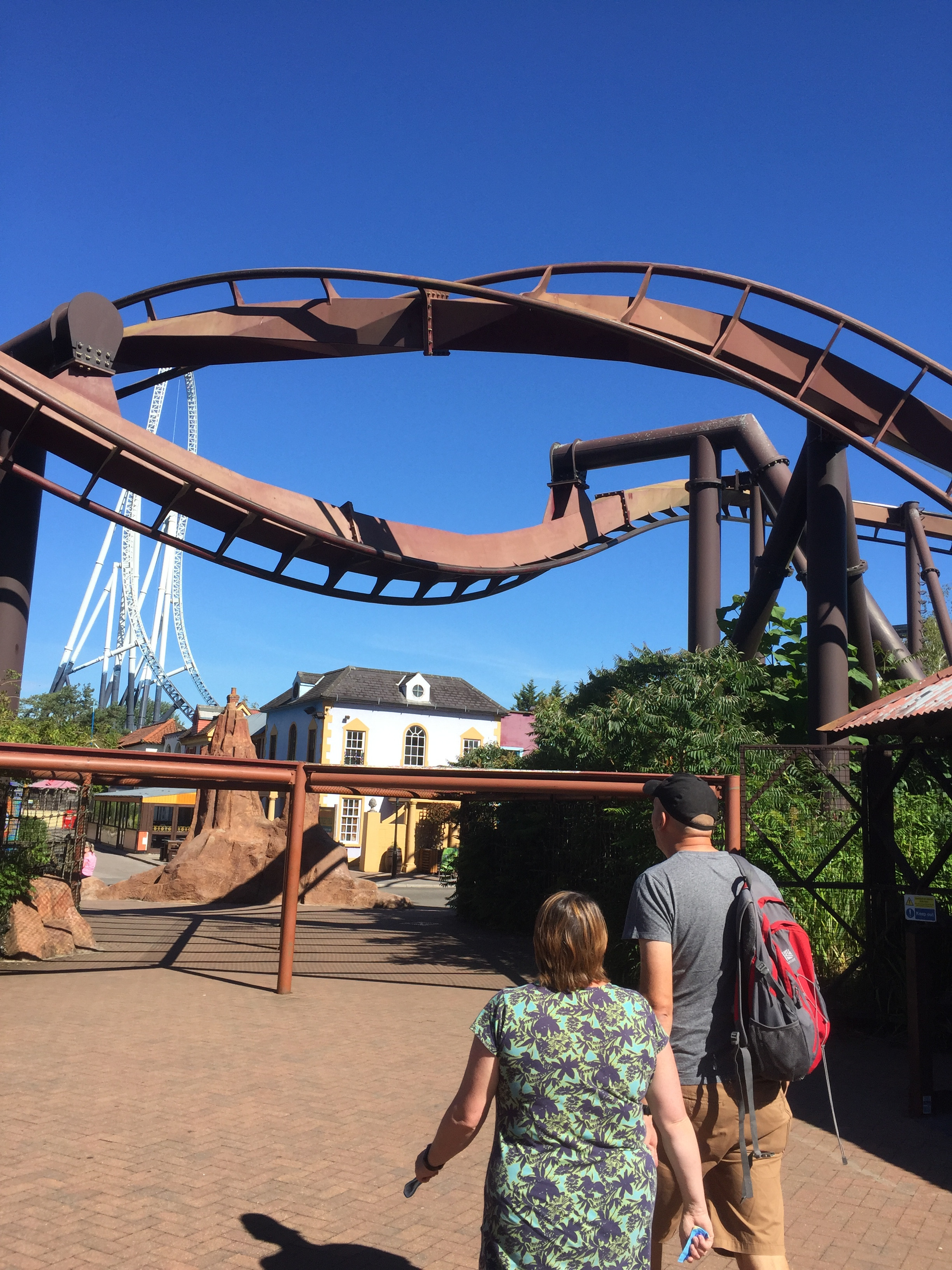 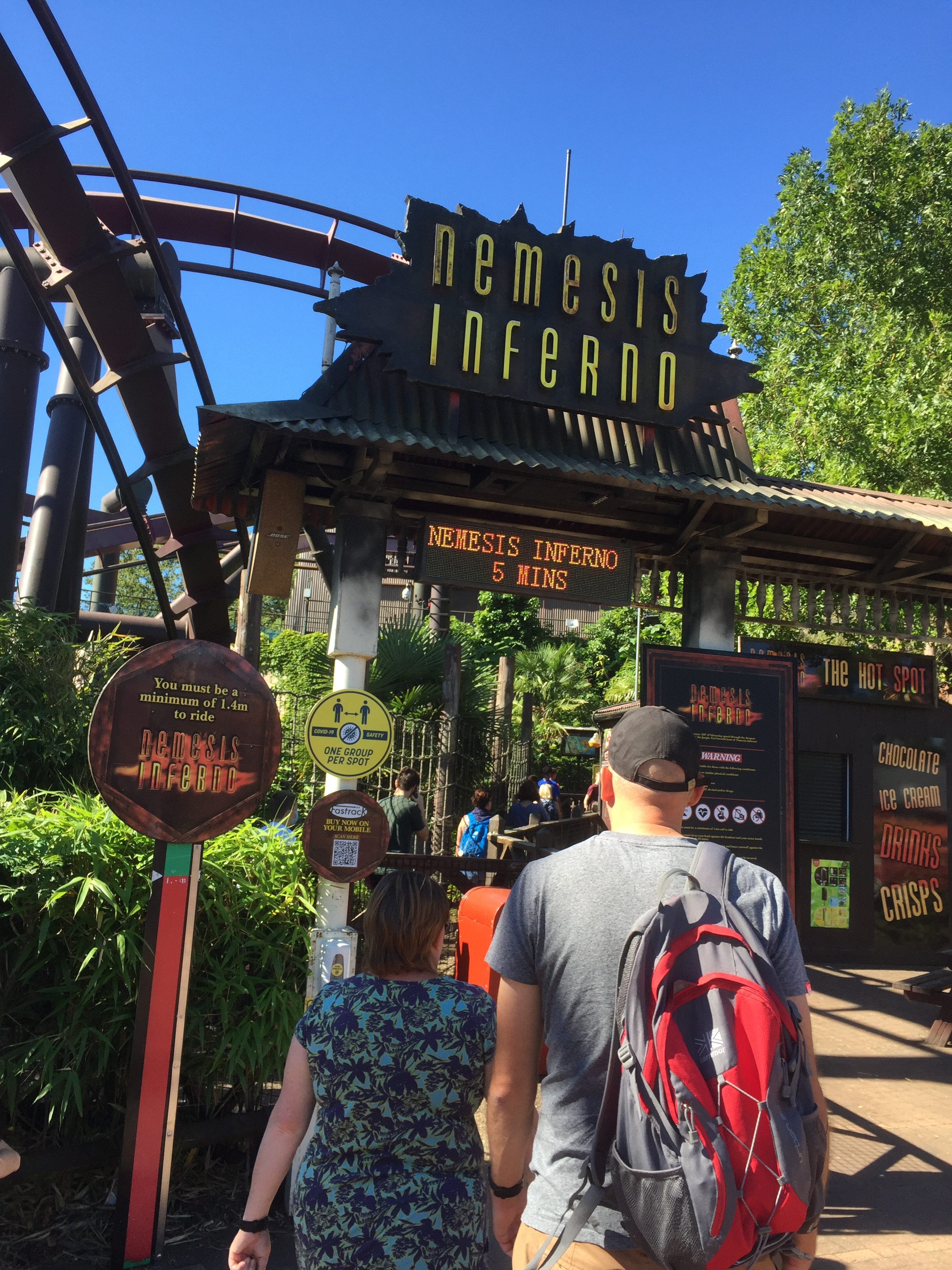 After a fun ride on Inferno, we headed to our next attraction...
Stealth
Stealth was nearby and on a mere 5 minute wait once again, so we joined it. We were on very quickly, and best of all, we got batched onto the front row! So, how was the ride? Well, let me tell you that Stealth on the front row is quite an experience; I enjoyed the ride considerably more than I’d remembered! The launch was absolutely phenomenal, and there was surprising airtime going into both the top hat and the hill into the brake run, especially the former! Overall, the only thing really preventing me from rating Stealth as one of my very favourites is the length, as it is very short, but it’s definitely shot a good few spots into the top 10 after that ride: 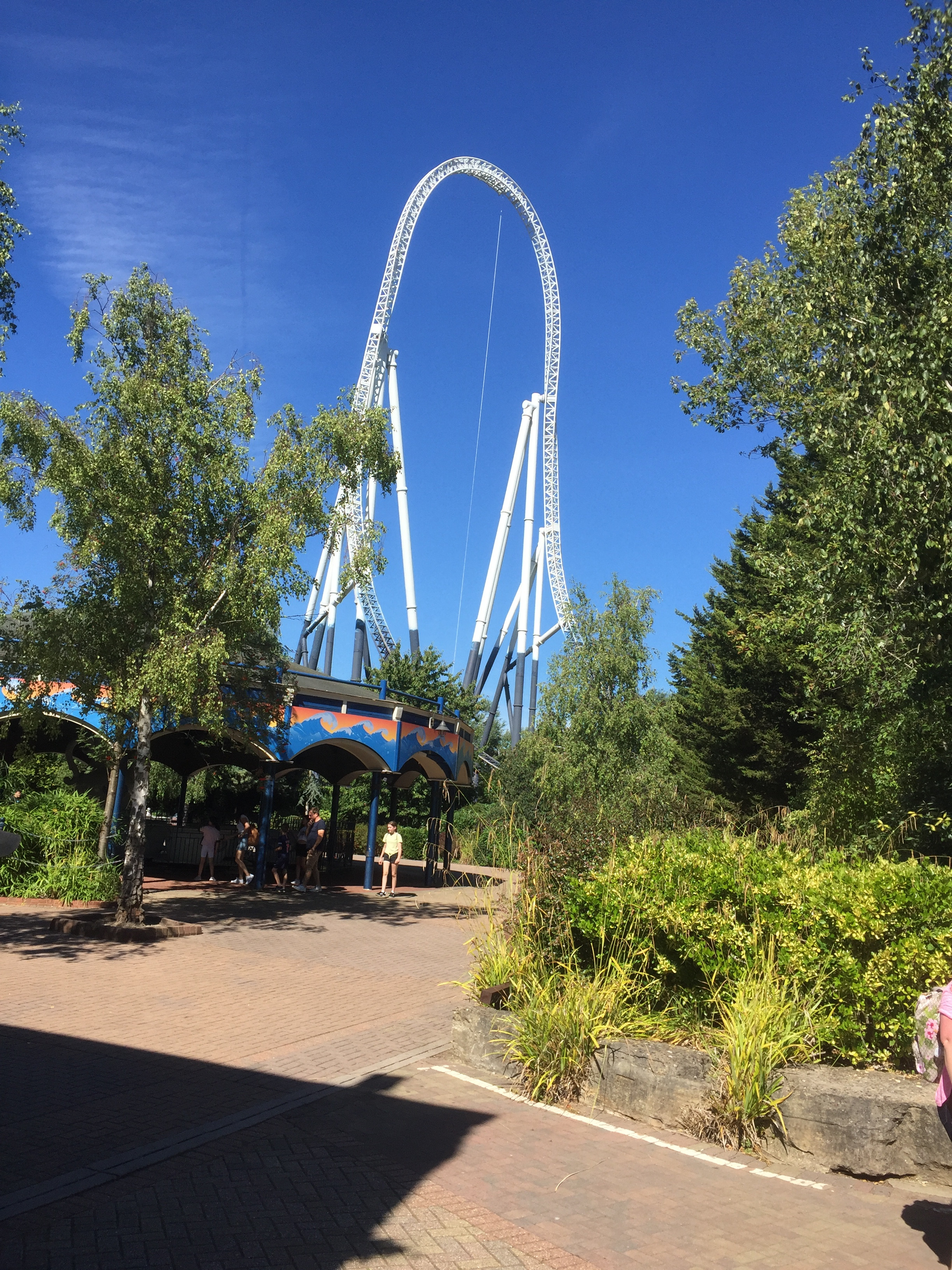 After our fantastic ride on Stealth, we headed to a personal favourite of mine at Thorpe Park...
The Swarm
We were greeted with a somewhat longer queue for Swarm, at 25 minutes, but we still joined it, as we all really enjoy it. The queue ended up being shorter than advertised (probably closer to 15 minutes), so that was a bonus! So, how was the ride? Well, I was seated on row 3, and it was just as I’d remembered; smooth, fast, just the right amount of force and just genuinely such a phenomenal coaster; quite a few surprising moments where it really let you hang out of the seat, and they were blissful! My only minor niggle with it is that the harnesses do tighten a bit, but it definitely isn’t a deal breaker; still definitely my favourite ride at Thorpe Park and my 3rd favourite in the UK: 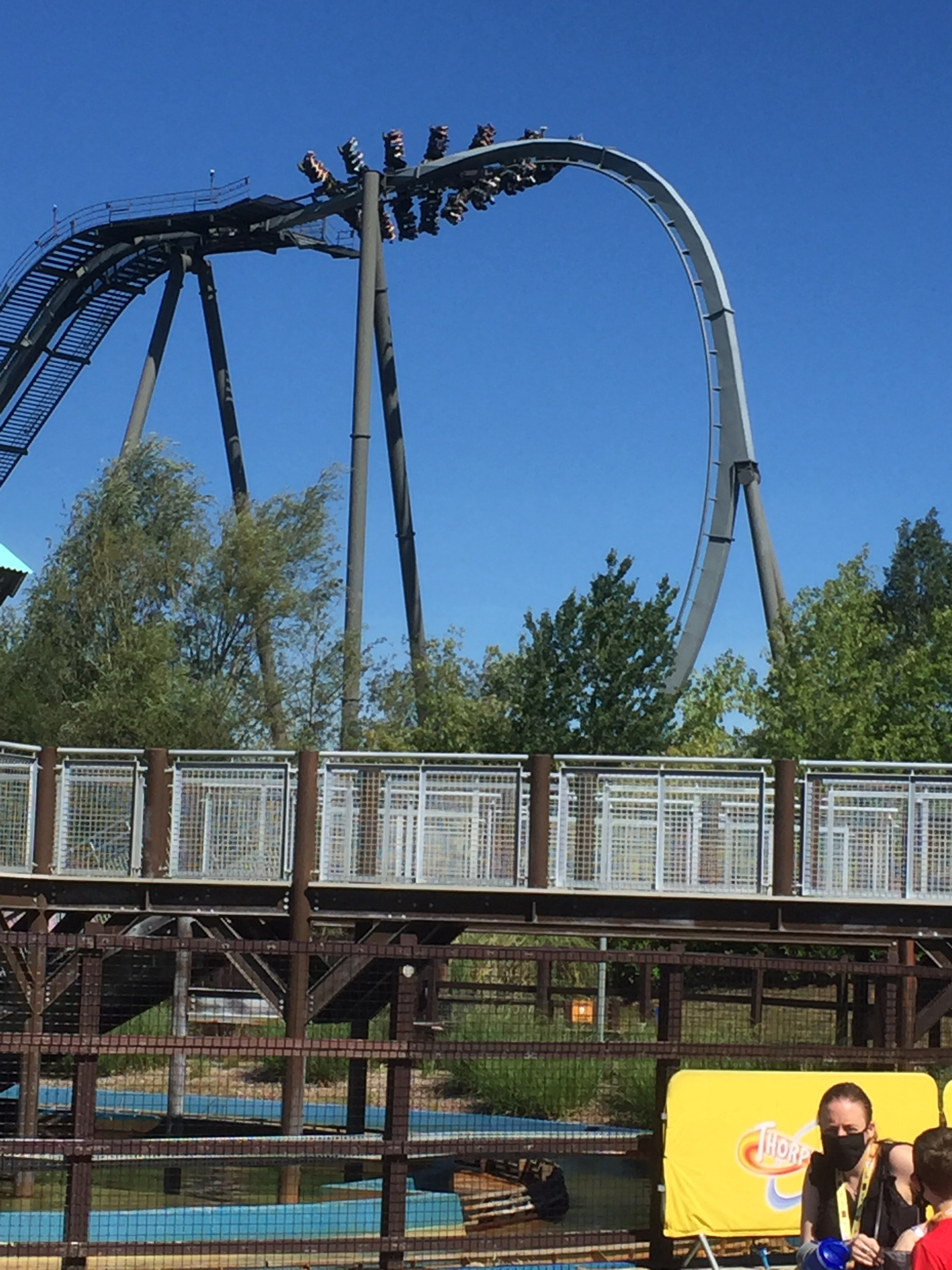 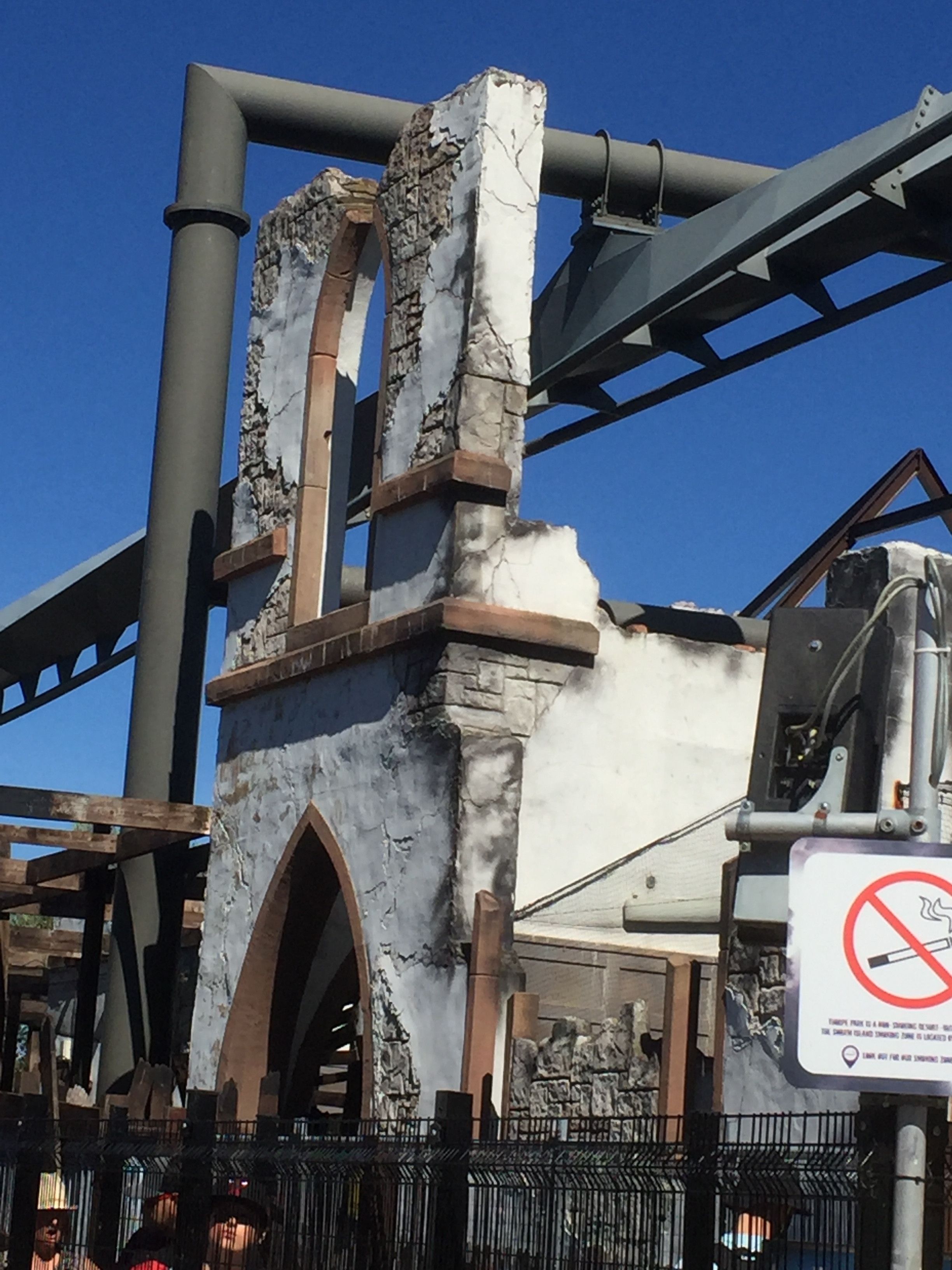 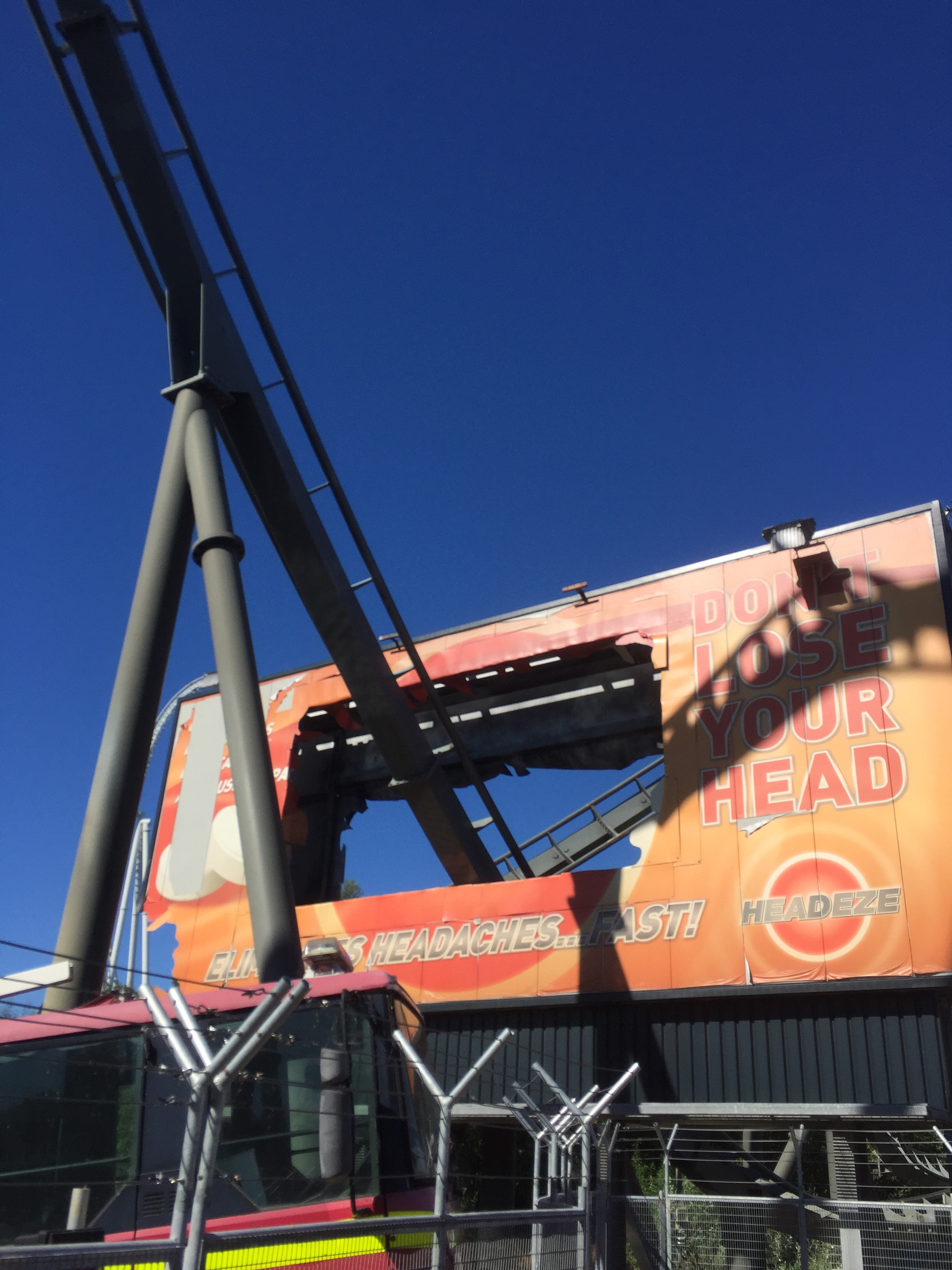 After our fantastic ride on Swarm, we headed towards the other side of the park to ride...
Saw: The Ride
Saw was on a considerably longer queue of 65 minutes, but we still thought it would be worth joining. It ended up only being around 35-40, so that was a plus! So, how was it? Well, I’m afraid to report that I personally found it one of the roughest rides I’ve ever had on Saw; I came off with a pounding headache! I must say the layout is very good, with 2 or 3 fantastic pops of airtime and a pretty good pace throughout (perhaps even a little too fast after the MCBR), but I just find it too rough to fully enjoy, personally: 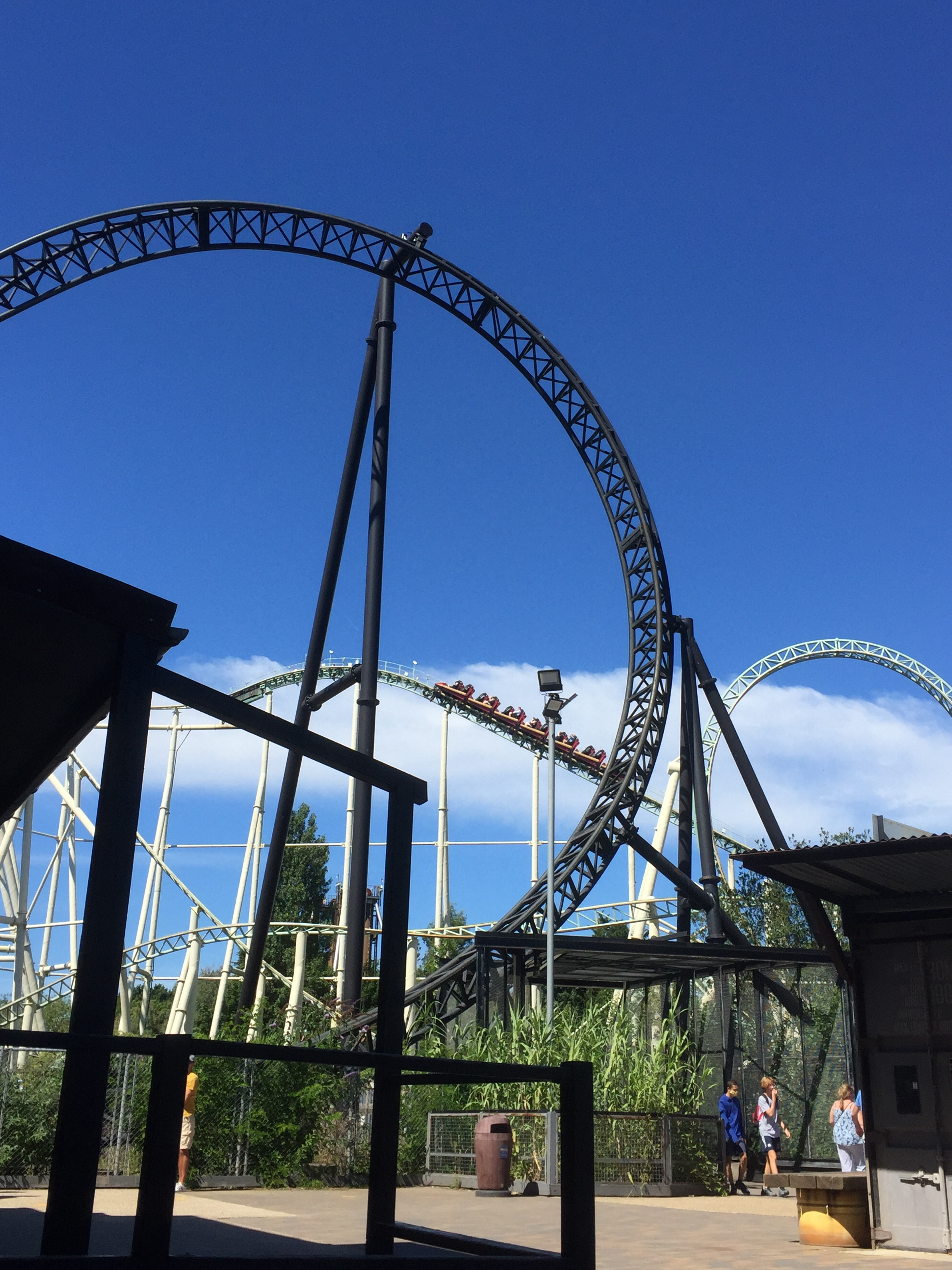 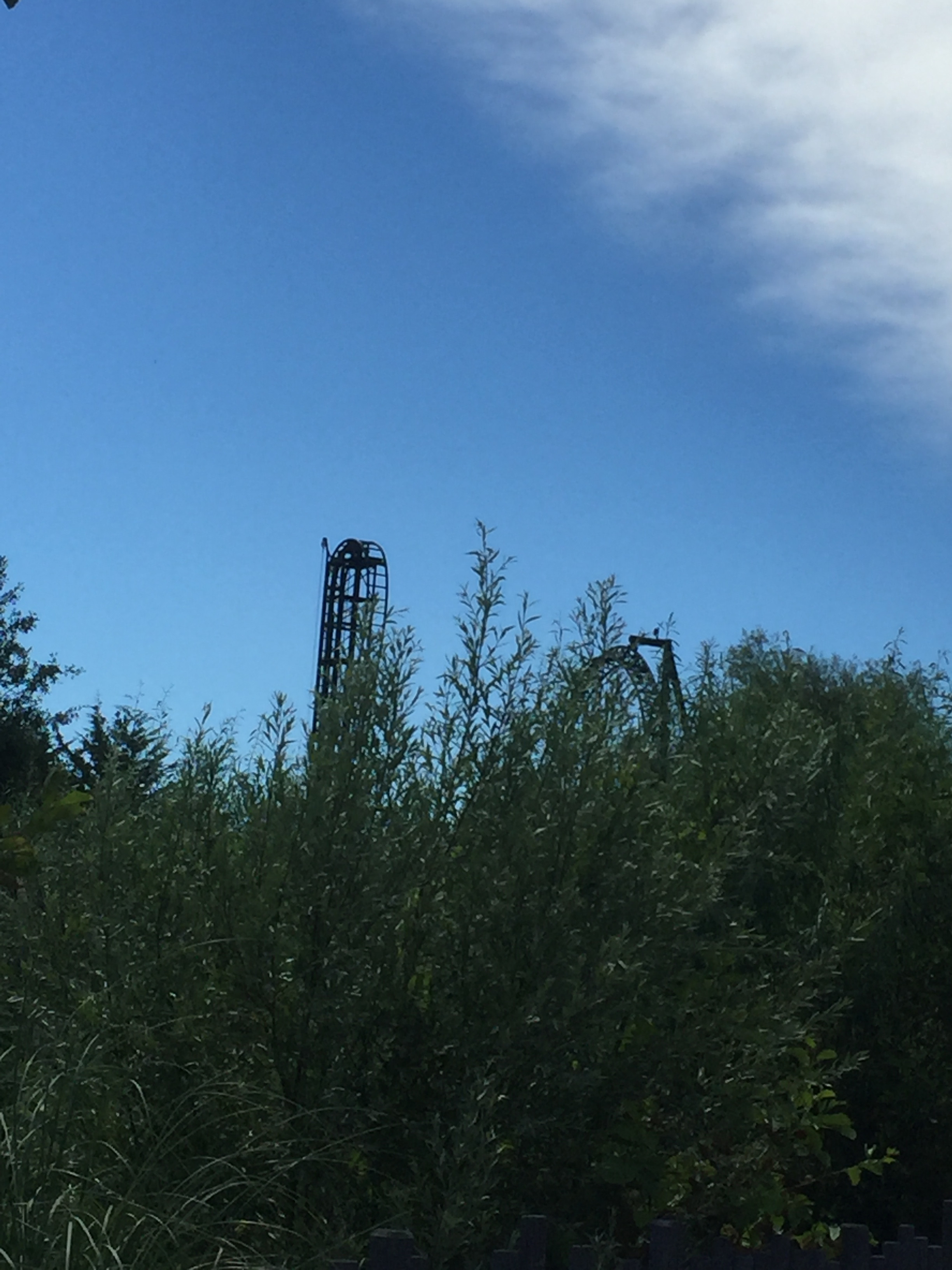 After having done Saw, we sat down to eat lunch, satisfied about having done 4 of the 5 big coasters by 12pm; it really was a fantastic start to the day! After our brief lunch break, we headed for something a little more relaxing...
Rumba Rapids
We were very hot by this point in the day, so we decided joining the 35 minute Rumba Rapids queue would be a good idea to cool off. It didn’t end up being too long in the end, and we were on the ride quite quickly. So, how was it? Well, Rumba isn’t my favourite rapids, and I came off relatively dry, with only a small drip or two, but it was definitely more turbulent than usual; my mum got soaked by a pretty big wave! Overall, we all enjoyed Rumba Rapids; a nice relaxing break from big coasters: 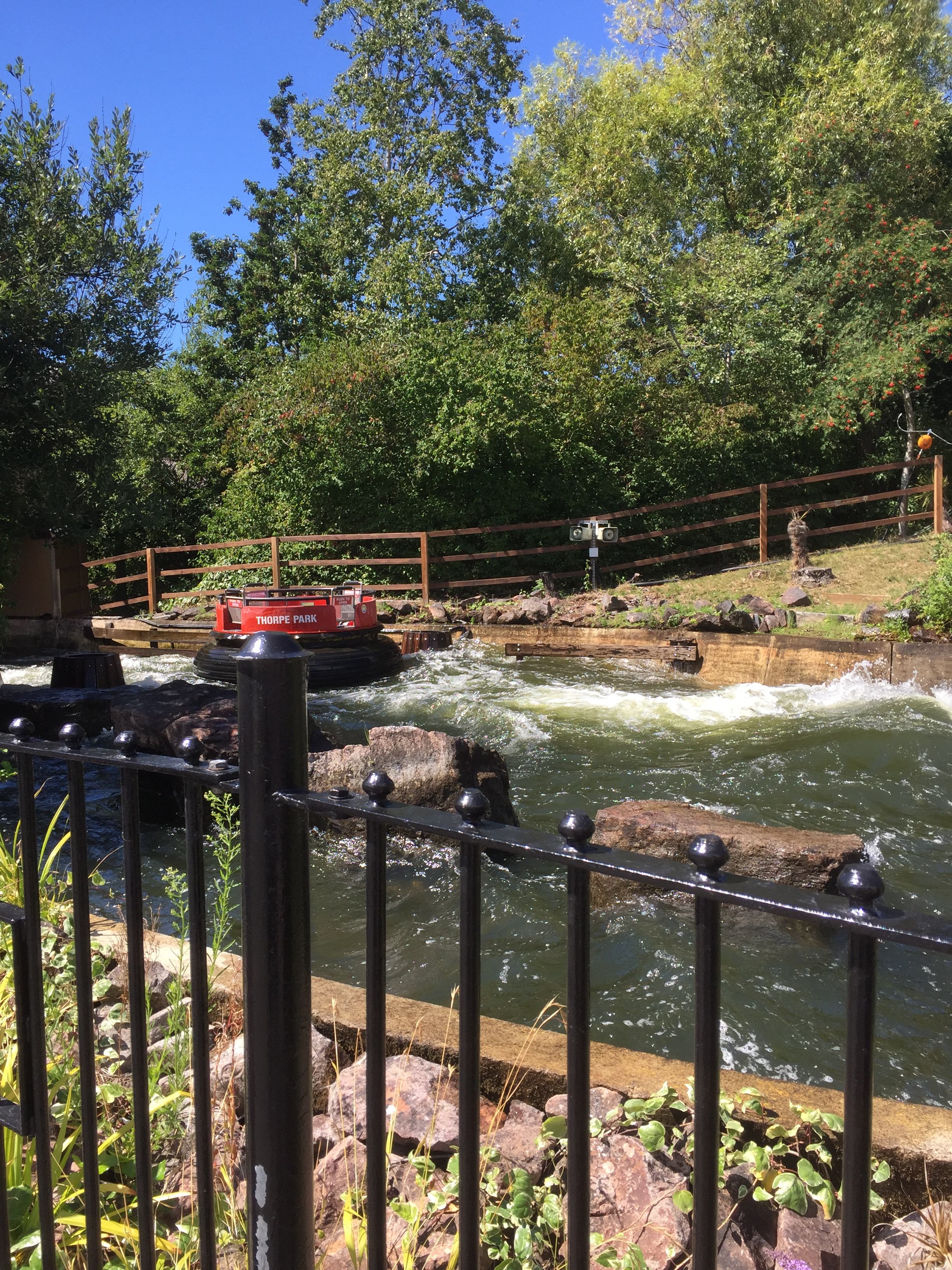 After Rumba Rapids, we headed to another ride relatively nearby...
Detonator
The queues had gotten longer by this point, so as Detonator only had an advertised 30 minute queue, we thought it might be a good idea to join. However, due to numerous delays, the queue actually took 50 minutes. So, how was the ride? Well, as always, it was incredibly forceful, deceptively so for such a small drop tower! Out of the permanent UK drop towers, it’s definitely my favourite: 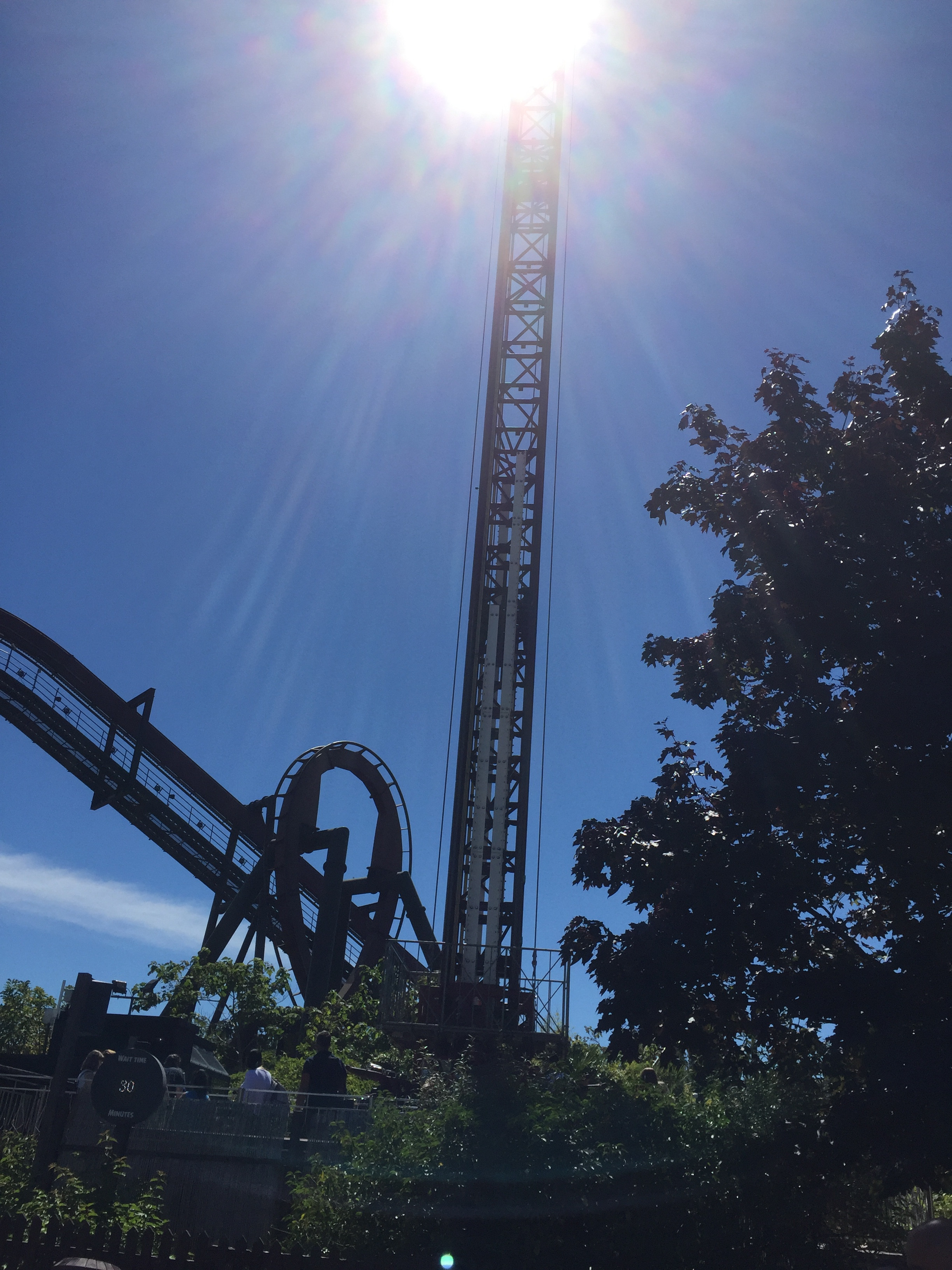 After our great ride on Detonator, we headed back over to The Swarm for a reride, at an advertised 60 minute queue. However, to our surprise, it was practically walk on, so I ended up having 2 rides back-to-back; one in row 2 and one on the back row; both were just fantastic, and definitely cemented the ride’s place as my favourite ride at Thorpe Park! The back row ride especially was just phenomenal; it was even zipping around that little turn at the end, which it never normally does!

After our fantastic final rides on Swarm, we agreed that it might be time to head home, even though it was only just gone 3pm; I was more than satisfied with our day and ride count!

Overall, I had a fantastic day at Thorpe Park! Our ride count was far higher than I’d expected, and on the whole, we had a brilliant time at one of my top UK parks!

I hope you enjoyed today’s trip report! The next time I post one will likely be an Alton Towers report at the start of September!

Top stuff Matt, Thorpe looks gorgeous against a clear blue sky. Completely agree with you on Stealth, front seat hits you in a different way and there's nothing else like it.

Ah right. Thanks for the trip report @Matt N!
Always nice to see your uniquely positive take on things.

Well, there is still another one out there somewhere. ?

Benenen said:
Completely agree with you on Stealth, front seat hits you in a different way and there's nothing else like it.
Click to expand...