They need to hurry up. They're clearly taking their time pouring concrete to save money. So frustrating.
S

JoshC. said:
They need to hurry up. They're clearly taking their time pouring concrete to save money. So frustrating.
Click to expand...

Yes clearly. What fools they are. It would be so much easier, faster and cheaper, where they just planting a giant 200.000 cubic meter mold - including all the layers and buildings - into the pit and pour all that concrete at once. Then they could just bend and weld the track parts together just-in-place to fiddle them in. Saves even more cost due to reduced need of storing and logistics.
Disclaimer: I had to pour in a lot of sarkasm at-once, to reduce typing costs. Thanks for your understanding.

http://instagr.am/p/BjsrhI3hfAz/
On Instagram a few pictures which appear based on the hastags be of someone showing off their handiwork from work experience in Phantasialand's costume department.
Behind the jacket on the wall is a design drawing for what looks like some kind of steampunk costume with wings.

The character appears to be on stilts or jumping stilts of some sort.
There is the possibly that this could be a new addition for the Wintertraum show The Magic Rose as the costumes in it are rather steampunk inspired.
Although the drawing doesn't have quite the same white winter style so could it actually be for Rookburgh? The wings and red colour scheme are certainly making me start to think so. Can't see there being the space for a new theatre in Rookburgh (so I'd rule out this maybe being for a new show in the area).

Currently the park only has street entertainment/roaming characters in Berlin on a regular basis, and occasionally in the Fantasy Area. In fact Fantasy actually used to feature Wuze characters on jumping stilts as seen in this picture from PHL-infos.de.

It would be interesting to see the park add more street entertainment, and give Rookburgh a bit more life.


Back on the construction site reports on PhantaFriends.de state that there has been a lot of concrete being delivered and poured for the ground for the next level of the area/roof for the underground level along the side of Maus au Chocolat - and in case anyone needs it explained this can only be done now that work underneath those spots is finished 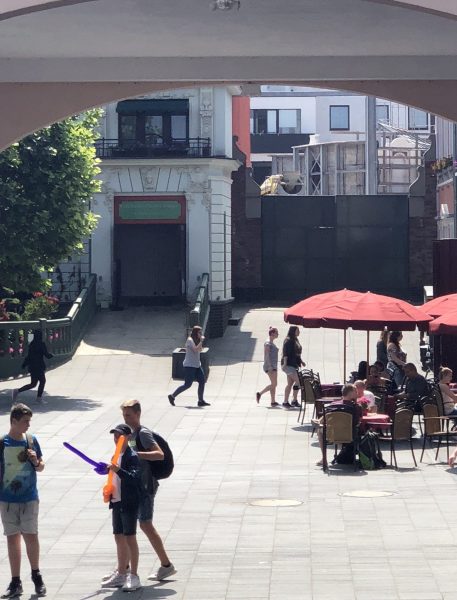 As more and more of the underground level is covered soon presumably we'll see more above ground track, theming and buildings go up. Over the summer I think we will really see Rookburgh start to take shape.
Last edited: Jun 8, 2018

Double post! But Tobi on PhantaFriends.de has written a new construction site update.

Today, six new towers (theming structures) were delivered and are being temporarily stored on site preparation for when they can be installed. These towers resemble the four towers already installed, which have recently received their decorative spires (as covered in a post above). Two of the six towers are much larger than the four others, and the two large towers and two of the smaller towers on one of four sides consist of metal plates rather than the truss like struts on the other sides.

As for coaster itself, a new support has been erected, and the brake run has now been mounted on the ceiling in its tunnel, next to the launch tunnel.

The entire station is now covered by the frame work and rebar, so that the ceiling for the station can now be poured.

On the new concrete floor above the transfer track, a concrete ramp has now been poured, which connects to the end of the old access ramp at road level. Meaning in the near future, construction site vehicles can now travel quite far into the construction site (depending on the load weight obviously).

Can't wait to see this massive project start to take shape over the summer! The area is probably going to look nothing like it does now by Halloween.

It also becomes more and more believable how this area will be even more detailed than Klugheim, considering how "slowly" the build is progressing. A multi-layered theme area is the last bastion they have to conquer, and it is really the only way of how you could top "The Spagetti-Bowl" Klugheim in terms of immersiveness in that tiny of a space.

It might sound like a "stupid" bias but this is also why I'm not that impressed by Disney Parks after all, because they are all pretty much operating at sandbox-mode, because Disney is the one company who does that. Real beauty arises from scarce resources.

On the other hand, this place is bursting at its seams at will so even more (I could imagine the multiple layers for Rookburgh were invented with the idea of maximum people-capacity in mind), and it certainly won't be able to go on like this forever. It's like watching a huge scale experiment, how much theme park can you put into a limited amount of space before it implodes. Sometimes I wonder if it's appropiate to think of Phantasialand like the way I do about Olympia Looping. It's awesome, the best of its kind, but it's also very possible that it won't be around for that much longer.

Small update from PhantaFriends.de
Another view of the new decorative spires on the towers at the Zero-G Roll.

The two recently delivered larger towers have now been erected on the Wuze Town site of the site. Due to the height of them the steel plated backs of the towers can be seen from the Wuze Valley. These are the first theming structures to go up on this side of the construction site.

A lot of work has also been reported being carried out behind the Rookburgh gate on the Berlin street. Wonder once work is done behind if they will place another teaser there at some point to replace the tarpaulins. 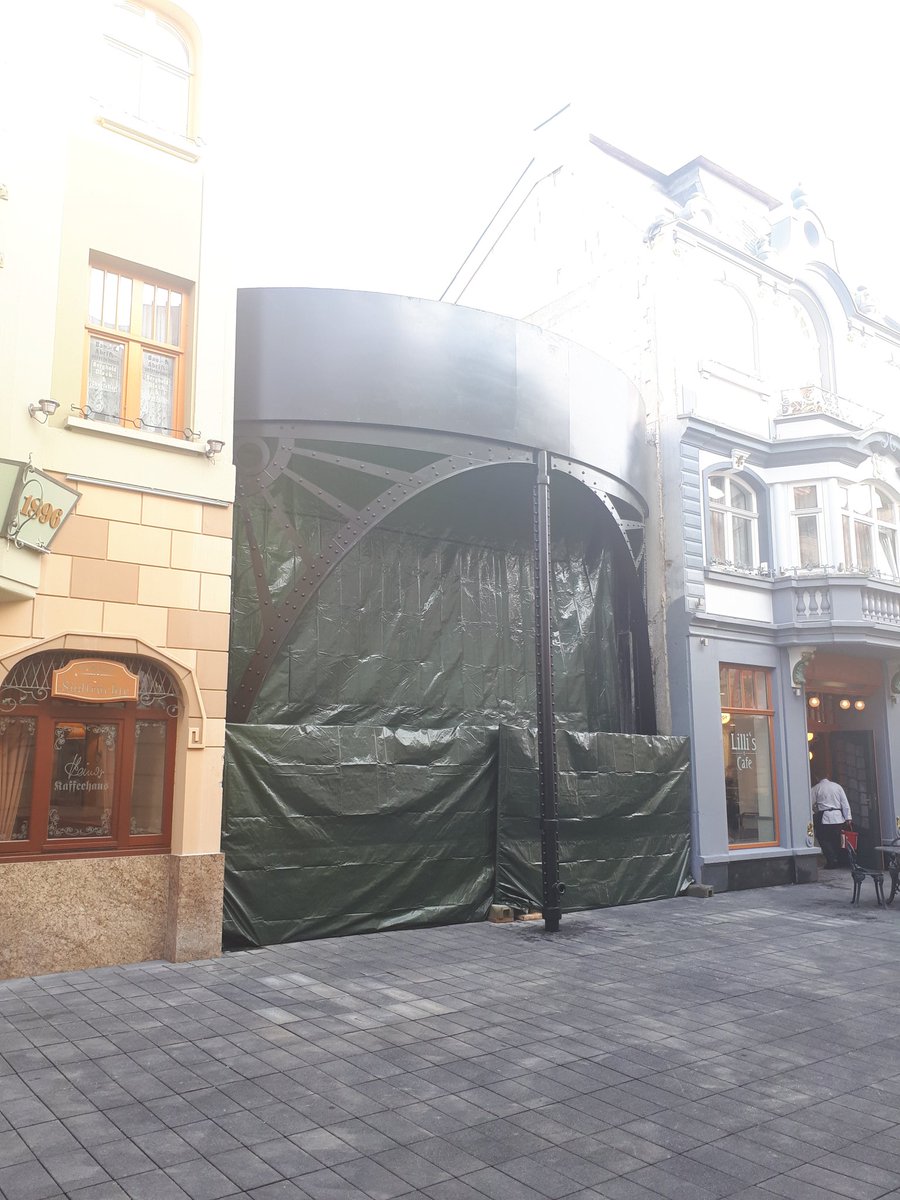 Is it just me, or are the first two images not showing up?

Either way, it's nice to hear of more progress happening!

Robert.W said:
Is it just me, or are the first two images not showing up?

Either way, it's nice to hear of more progress happening!
Click to expand...

That is possible. I do have that problem several times with photos from CSLKennyNI.

No offense to you, Kenny.

Rookburgh is growing. The towers/structures on the Wuze Town side have gotten taller and two more have been added.

I think Phantasialand is not allowed to build high attractions mainly because of the noise. If it's just something that doesn't make any noise, they have good chances to get it permitted. Don't forget they also have a 65 meter drop tower - which they probably only were allowed to build because it's silenced by the castle around it.

^Yeah Mystery Castle only got approved as the ride is enclosed and the castle look means it looks natural - as in a typical historic monument rather than something else. They almost certainly wouldn't have gotten it approved if the theme was something different.

Otherwise the park does have height restrictions, especially around the lake.
Its surprising to see that the towers appear to be taller than the Wuze Town building - but maybe it is just the camera angle and they are around about the same height.

At some point (almost certainly the next long off season after Wintertraum) they will have to build a large wall between Wuze and the back of Maus, along where the temporary wall and advertising poster currently are, as a sound barrier between F.L.Y. and the nearby residents at the lake.

Another picture from PhantaFriends.de showing even more towers being erected today.

And a new shot of the theming on the other side of the site. Good look at the colouring and detail of the decorative spire on top of the finished towers there.

Yeah that's pretty much what I meant to say. Phantasialand does have height restrictions, but they are not absolute (Like I think Alton Towers has them, they are not allowed to build above the trees, are they?), it depends on what they are building. They would never get the permission to build a tall coaster, because it would be too loud and wouldn't fit into the landscape. Big buildings are something else though. Probably the steampunk style resembles actual building styles enough so they got the permission to build it. If it was a sci-fi building or so probably not.

To be honest with you, the local politicians in Brühl have done such a poor job actually working hand in hand with Phantasialand, I wouldn't be surprised if all of these decisions were made single-handedly, rather than following a scheme. The best example for that is Wakobato, which is an already "sub-par" attraction that was only built after a long evaluation-process with the local residents making sure the ride could operate that close to the adjacent houses, only for the inhabitants to proceed against Wakobato not even a year later.

My best guess here is that these buildings mainly follow Phantasialand's own best judgement rather than legal limitations, because as long as the locals are not confronted with actual noise pollution, they can't really make a compelling argument against Phantasialand building just about anything. They have to follow the same rules as any Aldi or Train Station, which brings in some limitations in height for example, but naturally you would have trouble building any form of higher structure in an area like that. It doesn't really have something to do with Phantasialand being a theme park.

EDIT: Another view from Wurmling Express, really showing the height of these things - they dwarf Wurmling and the temporary Rookburgh wall.

Let's make the fans even more hyped and muddled: "Let us just put 8 huge towers right in front of the Fantasy - Rookburgh passageway".

Because of this towers, I'm even more confused about how the concept-art should be positioned on the site.

Maybe the rumours about the Flying Theatre are true after all? They are large structures but also contain lot's of empty space, so it wouldn't be crazy to plop one of them on top from a statics point of view.

I guess this is going to be the building with the bridge of the concept-art. It also can be a building opposite of this building where the bridge is connected with.

The supports of the bridge are already installed at 2 towers.