Was at the park last Thursday, and heard from a few different members of staff that Rookburgh will open in 2019.
They all seem to be under that impression, and considering how much work there still is to do, and how much theming will be going in (the park's creative team have said Rookburgh would surpass Klugheim in terms of detailed and immersive theming), I now think the same to be honest. My 2018 optimism has gone. Hoping the extra time means Rookburgh will also feature a substantial secondary family attraction and as having overall some amazing theming.
I'd say that one corner of the site where track and buildings have started to go up only covers about 30% of the area.
There was a lot of activity on the rest of the site and a lot of concrete foundations + walls work has been done since the last photo I saw of the site 2 weeks ago. No new track to be spotted on the actual construction site yet either.

Also Thursday morning when arriving at the park I saw surveyors working outside the Temple of the Night Hawk building. They were carrying out measurements of some kind.
Found that interesting given the rumours that Temple and Hollywood Tour are next to be removed. However if Rookburgh is opening in 2019 then TotNH and HT won't close until January 2019, rather than January 2018 as had been originally assumed.
S

No offence intended, but that's an awful lot of hearsay. I am not saying it's not true what you're saying, but without any shred of confirmable evidence I am still hopeful for Rookburgh in 2018.

sebi42 said:
No offence intended, but that's an awful lot of hearsay. I am not saying it's not true what you're saying, but without any shred of confirmable evidence I am still hopeful for Rookburgh in 2018.
Click to expand...

I would be happy if it was 2018. Regardles of staff heresay, my evidence for a 2019 opening would the large empty concrete hole. Could they turn that into their most complex and highly themed world ever in 8 months? I think its unlikely. But then again as I said that's what I think, its not fact. Unless the area starts to really fly up (pun intended) in the next few months or park make an announcement we cannot know for sure.

I mean, hearsay or not, looking at how much more they've got to do I would be surprised if it opens in 2018 as well. Definitely not until mid 2018 at the absolute earliest.
J

Smithy said:
I mean, hearsay or not, looking at how much more they've got to do I would be surprised if it opens in 2018 as well. Definitely not until mid 2018 at the absolute earliest.
Click to expand...

I would just find it awfully strange that they announced this new area and the coaster in June 2017 if Rookburgh is not planned to be open until 2019. For that reason, I am still holding out hope that Rookburgh could open in July/August 2018 and fly up potentially as fast as Klugheim did. There will be lots of behind the scenes work going on as well which we do not know about and general staff at the park aren't likely to be informed of when the new attractions are going to open until an official date is announced by the design and construction teams.

To be honest, at the moment I don't have the slightest clue whether we are looking at a 2018 or 2019 opening here, but what I can say is that I think it would be awfully strange of them to start advertising it in June this year if its not to open for another two years, because by the time it opens, the GP will have started to lose interested as its taken so long since they first started to advertise it.

It may have been planned to open in 2018 and progress may have stalled, we don't know we're merely speculating.

I'm just going off of what I saw when I was there and the very little that you could see, there was an awful lot of work to be done. Especially if it was to be done to the high standard that Klugheim was.

It's also not that strange to start advertising that far in advance, iirc Blackpool have been hyping up Icon since last season.

CSLKennyNI said:
the park's creative team have said Rookburgh would surpass Klugheim in terms of detailed and immersive theming
Click to expand...

Pretty sure Taron was announced more than a year in advance (I remember peeking at construction work through the goon flaps on two consecutive visits).

Yes it would be odd that they announced it so far in advance but then again ... do the majority of the parks visitors know or care about F.L.Y. yet? And regardless of that maybe Phantasialand are fairly confident that it won't affect their numbers next year. Taron will still be the main focus of their marketing. It has been a massive success for the park and could easy sustain them for another season as the big new draw for visitors.

Someone above made a remark that Klugheim flew up quickly so Rookburgh might do the same. This time last year half of Klugheim was standing and Taron's track was completed in October 2015. Rookburgh is still just concrete foundations in the bottom of a big hole with a small corner filled with some buildings and track. As the park would like to reveal things in their own time and keep things secret photographs are not allowed to be publicly shared and to respect their wishes I'm not posting any here.

With regards to the announcement:
Taron was announced April 2015 and opened June 2016. So just a little over a year in advance.
F.L.Y. was officially announced June 2017. I would imagine if it is 2019 they might get it done for the start of the season so lets say it opens in April 2019. That is still an unusually early announcement. Unprecedented in the park's history (except Chiapas but that wasn't planned for 2014...).
They started installing track for Taron before it was officially announced and rumours ran wild - especially the Screamscape claim that it would have Skyrush trains, dark ride bits and multiple trick track segments - that rumour ended up everywhere. Maybe they wanted to avoid any misconceptions flying around?

My main suggestion for why they announced it so early is:
- With the first supports and track installation not far off (31st July), and then track parts, including the launch parts, being visible at Vekoma Vlodrop; the cat would have soon been out of the bag anyway. We would have known a launched Flying Coaster was coming.
And Looopings had kinda already spoilt the surprise with their leak that a Vekoma Flyer was allegedly coming back in April.
So why not announce it first to surprise people, and create a lot of hype and interest?

Will be interesting to see how construction progresses between now and Christmas. If there aren't any major developments there won't be a chance in hell it will open Summer 2018.
I still think it will be 2019 now. There is just so much to do and PHL like to take their time to create quality stuff.
Last edited: Nov 18, 2017

Just to remind you: As mentioned already earlier, the excavation and concrete works took and take way longer than expected due to the amount of iron that had to be worn out and in addition water that was constantly forcing its way in. Therefore, the announcment date was chosen due to the anyways obvious proceeddings on site - independent from a previously or currently planned opening date sometime in the future.

F.L.Y. Update from PhantaFriends.de
User PHL-Marcus has put together a basic diagram of the concrete work on site.
He does point out that it is difficult to exactly draw some details so it isn't entirely accurate (also some things are extremely hard to see). The two large tower cranes on site are marked with a yellow square. 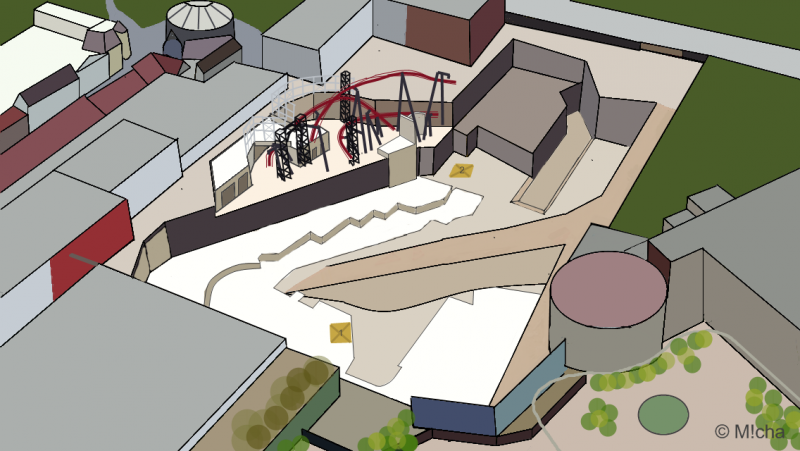 In the concrete there are, of course, in many places reinforcements for further foundations, walls and others, but the detail is hard to draw on (so this doesn't show everything). The poster assumes the large flat foundation in the bottom right is where the sidings/maintenance bay will be; based off the layout of concrete structures and Vekoma coaster footers there. 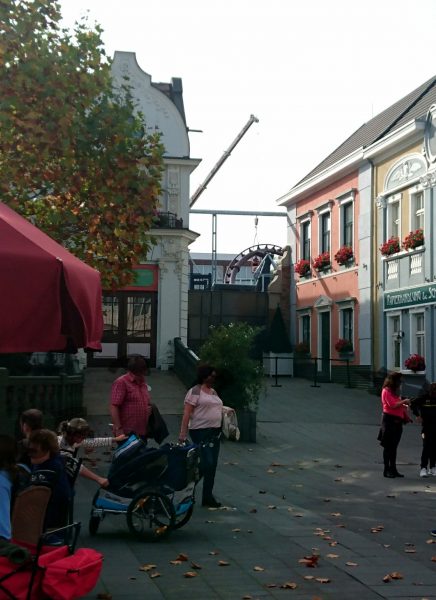 The small crane used to erect most of the track so far has returned to the site today. It was used to lift workers in a basket to carry out checks/inspections on the track bolts. 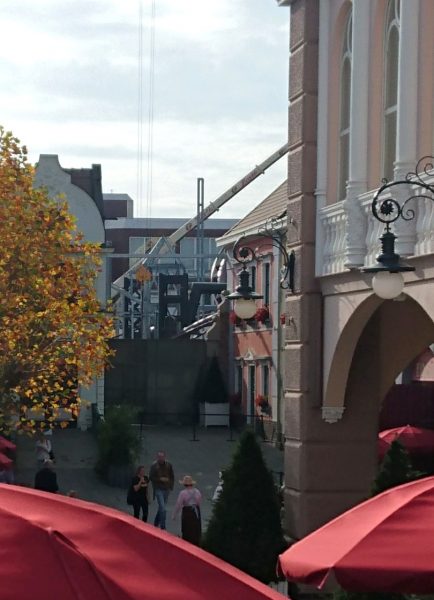 When it was announced I fully assumed it would be a 2019 opening. These big projects tend to take that long.

I'm extremely surprised a drone hasn't gone up to capture video yet, even from the roadside.
That's what kids do nowadays right?

DelPiero said:
I'm extremely surprised a drone hasn't gone up to capture video yet, even from the roadside.
That's what kids do nowadays right?
Click to expand...

Yes and people did so during Klugheim's construction such to Phantasialand's annoyance.
Although the site was filmed from above once with helicopter during the summer - but that was by Phantasialand themselves! (God knows when we'll see that footage).

DelPiero said:
I'm extremely surprised a drone hasn't gone up to capture video yet, even from the roadside.
That's what kids do nowadays right?
Click to expand...

CSLKennyNI said:
Yes and people did so during Klugheim's construction such to Phantasialand's annoyance.
Although the site was filmed from above once with helicopter during the summer - but that was by Phantasialand themselves! (God knows when we'll see that footage).
Click to expand...

Plus drone regulations are very strict in Germany, you can't just go up that high without permission and take photos of what is technically private owned land.
Didn't PHL say the new area would be opening in 2018 already?

NeoXIII said:
Didn't PHL say the new area would be opening in 2018 already?
Click to expand...

No. They simply announced a new area was being built called Rookburgh, and then announced the main attraction in the area would F.L.Y.. No mention of opening years. It was assumed that it would be 2018.

New track is on site. 6 track parts have been installed in straight line at the bottom of the pit along the side of Maus au Chocolat. The track is the sideways loading track; as seen in mrrc's picture below. Therefore this will most likely be the station. 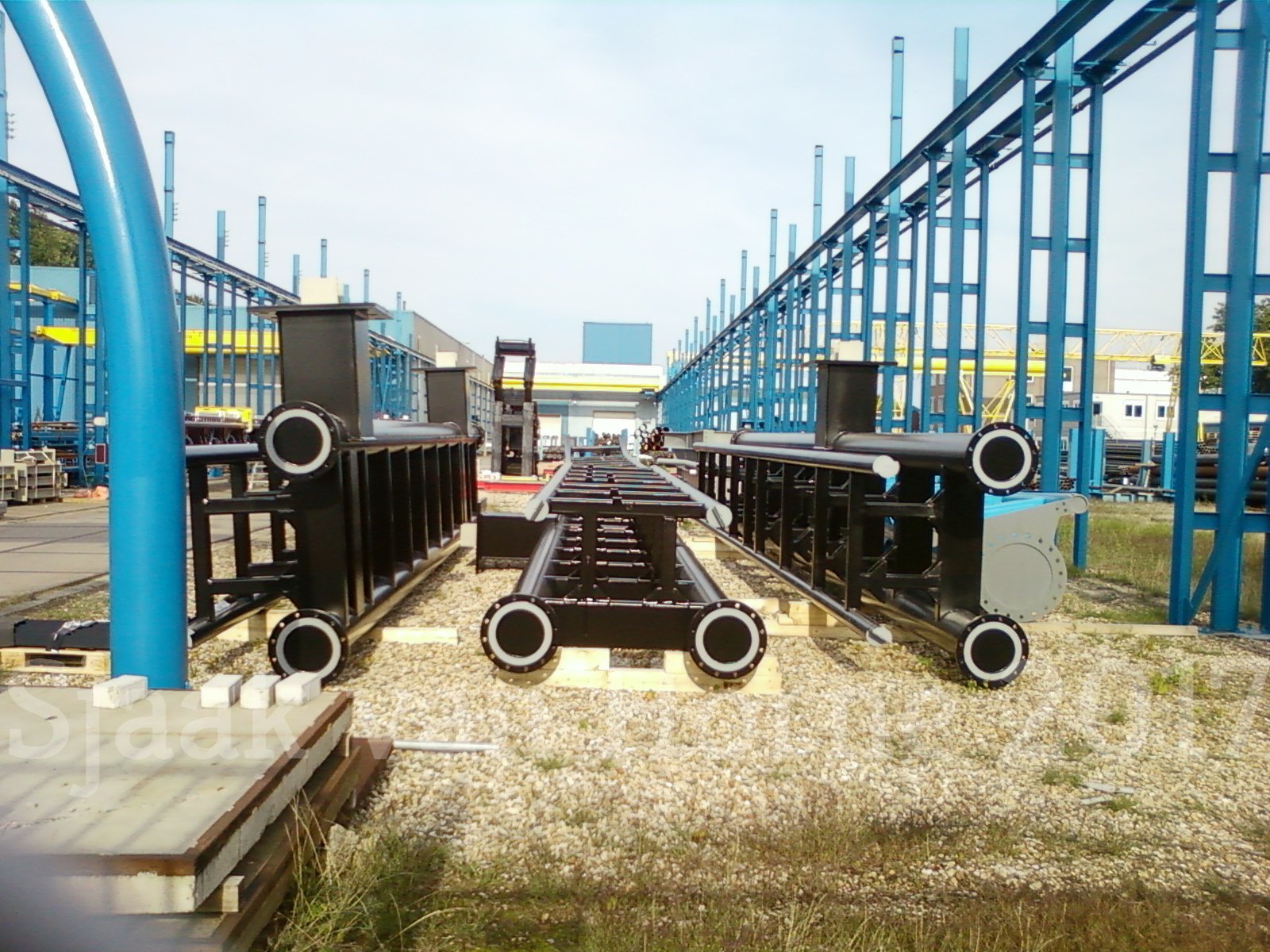 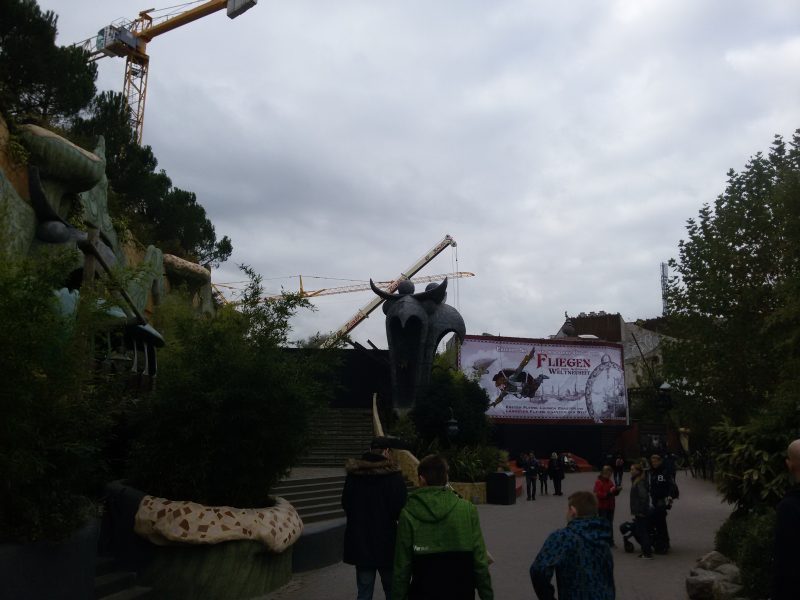 The small crane used for track installation has been very active. It has been reported that more black sideways track has been delivered including two track parts of the break run. 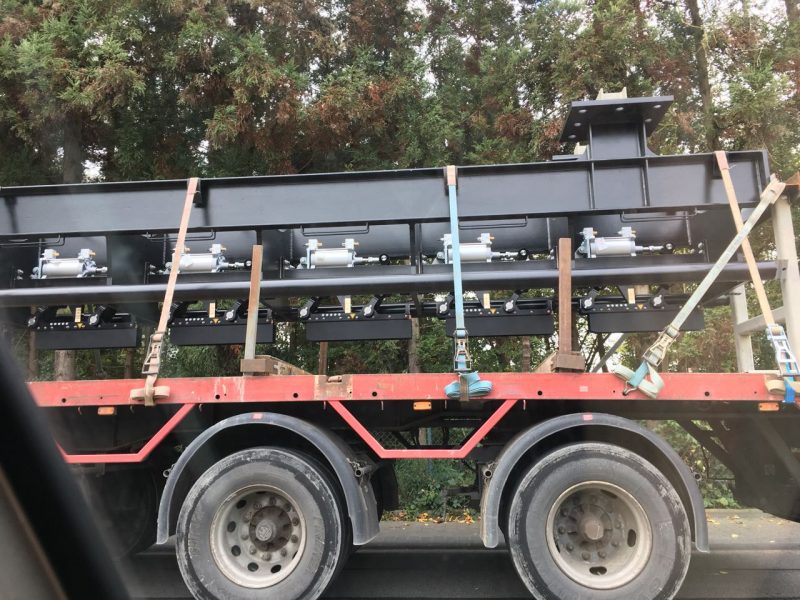 Even more black track parts have been delivered to the site. And most importantly the first section of the weird curved red launch track arrived in Phantasialand. 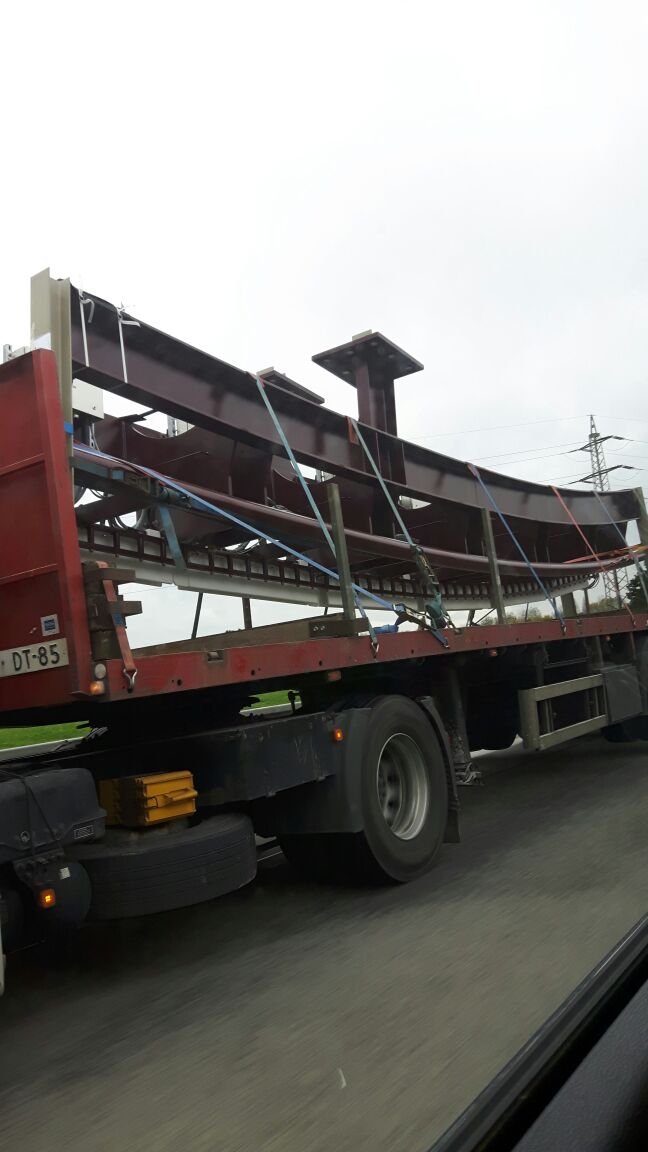 Going to be interesting to see the weird launch being built.

EDIT: Yeah this isn't true please ignore: It has also been reported on PhantaFriends.de that on site is a tall statue of a horned animal (the poster suggested it was a bull). Bit odd if true as it doesn't sound very steampunk. Unless it is some kind of mechanical bull thing?
Last edited: Oct 31, 2017

CSLKennyNI said:
It has also been reported on PhantaFriends.de that on site is a tall statue of a horned animal
Click to expand...