If it is the S&S Launch that was leaked earlier, I just hope S&S doesn't **** up this time around.

Well, I wasn't really saying it was the same thing, just that it might be (and linking the discussions before someone said "wasn't there a thread about this")!

*Not official translation but you get the point

I’m not the most abstract-thinking of people, but that definitely looks to hint at a launch! The S&S launch concept seems very plausible, so I reckon they could go with that. Especially as it was designed for the Vonkaputous area. Unless the park may have changed their mind after GaleForce and gone with something like a Gerstlauer Infinity or a Premier Sky Rocket.

Launched Tranan? Sure, why not!

Dar said:
Launched Tranan? Sure, why not!
Click to expand...

Judging by what Tranan looks like from a POV, that sounds rather uncomfortable!

It sounds like a rather large ride, though! The thumbnail is taken from Lynet at Fårup Sommerland, so will it be a launch coaster? One 50+ meters tall? Or does the usage of the word "plunge" indicate a Kärnan-style lift hill tower? Either way, this one is definitely worth paying attention to. 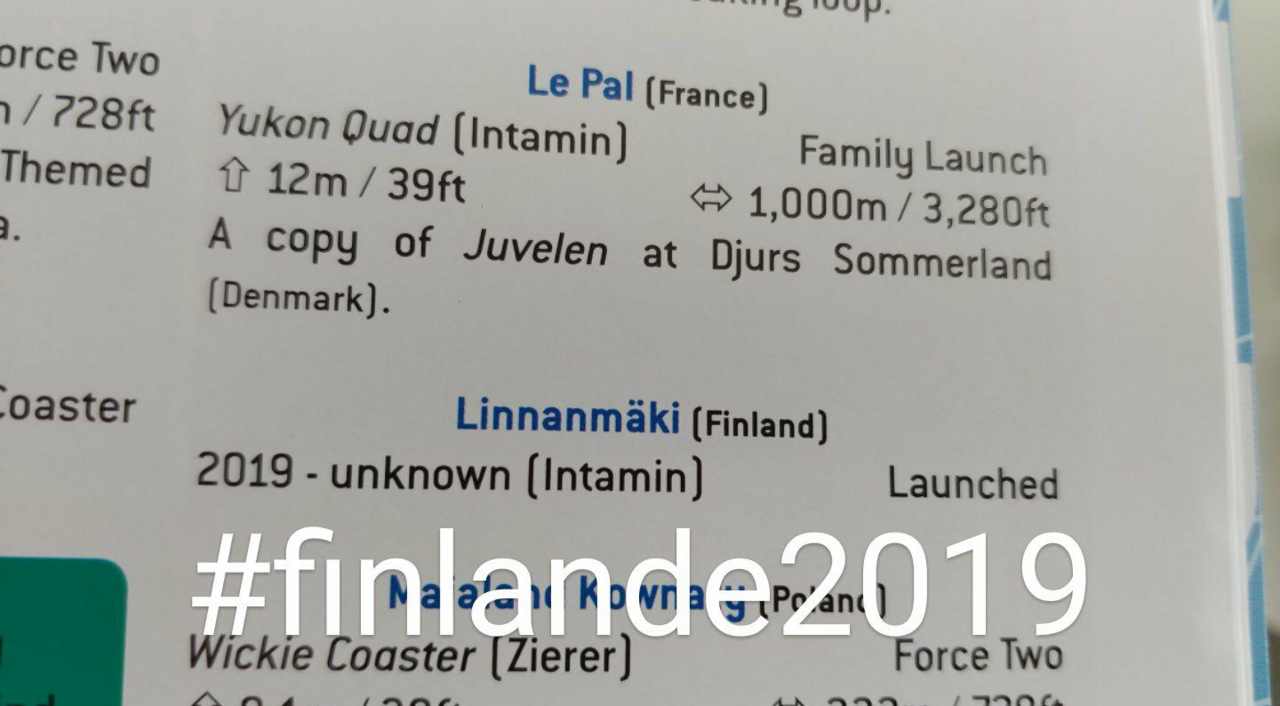 The plot thickens! Maybe the video we saw earlier was S&S's proposal that got rejected late in the planning stage?
Either way, rcdb has just created an entry for it, which we can presumably take as gospel: https://rcdb.com/16138.htm

So it'll an feature an LSM launch and have a height of 170.6ft, making it the tallest coaster in the park. It's also confirmed to be steel (duh) and set for an opening date in 2019. Since S&S's proposal featured was a multi-launched semi-shuttle, perhaps we'll see the same ride type if it is indeed an Intamin? So Soaring with Dragon (Wanda Hefei), but just a little bit smaller?

Also worth noting the track in that image could easily be the older style Intamin track too. Since it's concept art, I wouldn't read into it too heavily.

Well whatever it is it will have a length of about 3600 ft or 1.104 km according to the video description

@thx, any local news or rumours on this?

Having seen that photo of Lynet's top hat that Linnanmäki posted on Facebook, I would assume it to not be a shuttle, and will have a top hat similar sized to Nefeskesen's. I would think that S&S concept we saw was scrapped and Intamin completely re-designed it.

The question is, though... how is First Drop allowed to leak the manufacturer? In fact, how do they even know who's building it?
EDIT: Just found an interesting nugget of information. The top speed, according to RCDB, will be 65.9mph. Take from that what you will. I think this will be pretty big.

Staff member
Social Media Team
I think people have read into the S&S video a little too much. It may have just been there to explain the new generation of El Loco coasters and what they can do - yes, it may have been pitched to Linnanmaki, but that never means it was anything more - so the phrase 'thrown out' for the Intamin may not stand.

Most manufacturers don't talk about projects they never got, it's highlighting that another manufacturer was chosen over you, which in turn, can dissuade further purchases by other potential clients.

Staff member
Administrator
Moderator
This coaster really intrigues me, and I wonder what to expect here. Given that RCDB is right and we're looking at an Intamin coaster, there are at least some existing coasters to compare with. Let's go through the stats of some other Intamin launch coasters, just to see if they are similar enough to say something about the layout. We'll call the coaster "Unknown", just for the sake of easy comparison (because "The new coaster for Linnanmäki" takes too long to write out).

This gives it a length slightly longer than iSpeed and Soaring With Dragon (980 and 1050 meters, respectively), but shorter than Taron and Maverick (1320/1356 m). Both of the latter have dual launches, though, and I've got a feeling that Linnanmäki would have said as much if their coaster was getting them too.

A top hat after the launch seems likely, as Linnanmäki does not have that much room to build on. The ride being replaced, Vonkaputous, is barely 330 meters long, and they barely have a stretch of land 100 meters long to build on. Launching into a non-inverting loop seems out of the question, as there simply would not have been room for it. The land does have an L shape, though, if a lot of trees are chopped down. The terrain isn't flat at all on the site. See for yourself.

Another coaster that matches interestingly well is Volcano: The Blast Coaster. At 112 km/h and 47 m tall, its stats are within 10 % of those listed for Unknown. Still, if an inverted coaster was on the table, wouldn't the park have marketed that first and foremost? Also, there might be a good reason why Intamin suddenly stopped making inverted coasters (or at least, that parks stopped buying them), which is another argument against it.

So yeah, I predict a sit-down coaster with a single launch into a top hat, followed by some twisty and compact layout. The terrain is too rough for it to be a clone of anything, it has to be specially designed for the site.

Lofty said:
I think people have read into the S&S video a little too much. It may have just been there to explain the new generation of El Loco coasters and what they can do - yes, it may have been pitched to Linnanmaki, but that never means it was anything more - so the phrase 'thrown out' for the Intamin may not stand.

Most manufacturers don't talk about projects they never got, it's highlighting that another manufacturer was chosen over you, which in turn, can dissuade further purchases by other potential clients.
Click to expand...

I imagine it was one of the rides pitched for that site when the park put out a tender for rides on that spot. Im not sure the video was really ever meant to make it into the public domain. It didnt last too long from what i remember.
Maurer also posted a video of a racing spike coaster for the very same spot. But the spike probably needs all the advertising it can get