Pokemaniac said:
In other words, they've built virtually every two-dimensional coaster offered on the market in that spot? I guess we'll see a clone of Pulsar at Walibi Belgium replacing it next.
Click to expand...

In other news, I've found this nice little video of an old Taiwanese Park, Datong Water Park. The place is not listed on rcdb yet, but it did have a few coasters, including the first looping roller coaster in the country. The park operated from 1971 till 1991.
https://zh.wikipedia.org/wiki/大同水上樂園

Man the Music really makes that video.
Must admit its a new one to me. The corkscrew coaster at the park is really unusual too. A unique layout as far as i can tell.

NOW THIS is possibly the best thing ive ever seen Some arful music video featuring footage of said corkscrew coaster.
Skip to 1min 40ish for the coaster footage.

Hi all, loads of great pictures I have never seen of the Scenic Railway at Belle Vue on this link with some interesting info:

Wow, those Belle Vue pics are awesome, thanks for posting

Staff member
Moderator
Social Media Team
Found some new (to me) photos of the Jack Rabbit, which operated at the now defunct Idora Park in Youngstown, Ohio. This was the "second fiddle" roller coaster at the park, with Wild Cat (my avatar and signature) being the E-ticket thrill ride. The park and it's rides operated until 1984, when a park-shuttering fire broke out, destroying structures and rides. It would have cost millions of dollars to repair; dollars that Idora Park did not have. The property was sold in 1985 to new developers, who had plans for a religious complex to be built, but no development ever happened. Coasters remained standing for years, until the entire site was demolished in the 2000s. Ownership remains in the hands of the religious group, undesiring to relinquish ownership.

A fun aside - I saw Conneaut Lake giving a call for parks looking to pass off attraction (http://www.screamscape.com/html/canobie_lake_park.htm). Conneaut Lake did approach the new Idora Park ownership in the late 80s on purchasing the Jack Rabbit and Wildcat roller coasters; a good fit for Conneaut's eternal preservation of Golden Age roller coasters. Blueprints were even preserved from the 1984 fire, making reconstruction all the more possible. The deal never materialized however.

Something a bit different with a shot of what may have been China's first ever coaster. Operating from 1903 to 1918 at Zhang Yuan Gardens in Shanghai.

And only one of those is gone now (2 others moved, including the one at the park the sign is from)
My parents used to date at Paragon growing up in Boston. They took me once, long after everything was gone but I'm pretty sure we did the Carousel.Next time I go home I should check it out again. - http://www.paragoncarousel.com/
Last edited: Jan 23, 2019

Staff member
Moderator
Social Media Team
This is pretty cool and something I was unaware of on the Crystal Beach Cyclone, a very aggressively banked turn (I assume at the bottom of the second hill?). Especially with as much celebration we gave Hades back in the day for being so forward thinking in having a 90 degree turn. (From Defunct Wooden Roller Coaster Archive FB Group - FB tag doesn't seem to work)

I believe that turn is in the 'figure 8' helix section of the ride after the mid-course.

Staff member
Moderator
Social Media Team
Thanks for that reference @CanobieFan! I knew this coaster was crazy, but never realized the steepness of turn banking.

Can please RMC rebuild that Ride?!!!!

A set of 3 pics from my collection which are media images from when Giant Coaster at Fuji-Q in Japan opened in 1966.

Theres an interesting issue with this ride though. If this ride opened in 1966 and its 40m stats are correct it means Colossus at SFMM was not the tallest ride in the world when it opened as the park advertised.
This ride would have been a whole (huge

) 1.9m taller. I feel this is an issue that has been lost in the depths of time though.

roomraider said:
Theres an interesting issue with this ride though. If this ride opened in 1966 and its 40m stats are correct it means Colossus at SFMM was not the tallest ride in the world when it opened as the park advertised.
This ride would have been a whole (huge

) 1.9m taller. I feel this is an issue that has been lost in the depths of time though.
Click to expand...

What's even odder about this ride is that it was (at least according to rcdb) even listed in Guiness Book of Records as the longest coaster. It would seem weird if they didn't pursue the 'tallest record' if that was also the case.

EDIT: I've dug up an old Slovenian version of the book from 1976 (or 1977, it's not very clear) that has no mention of the Japanese coaster and lists Crystal Beach's Comet as the world's longest at 1,46km and Montana Rusa in Mexico and Screamin Eagle in SFStL as the world's tallest at 33,5m.

Another interesting bit of info is that they listed this coaster (https://rcdb.com/2581.htm) as the tallest/fastest coaster in history with the speed of 91,7km/h and height of 36,5m.
Last edited: Jan 29, 2019

TilenB said:
Another interesting bit of info is that they listed this coaster (https://rcdb.com/2581.htm) as the tallest/fastest coaster in history with the speed of 91,7km/h and height of 36,5m.
Click to expand...

Ah the infamous Blue Streak. Famous for having its biggest drop right at the end of the ride.

Also included a great photo giving different perspective from the kid's area (now Planet Snoopy), where one of the stations was located, now a Snoopy Boutique gift shop. The other station stood in the Octoberfest area by Adventure Express. Usual photos of the sky ride are from the main entrance, where the Sky Ride stood over the fountain feature.

To give some additional perspective of the ride, here's a vantage near the other station in Octoberfest - the restaurant you see in the middle is the park's current Beer Garden (Oh sorry, that's "Bier Garten", because German): 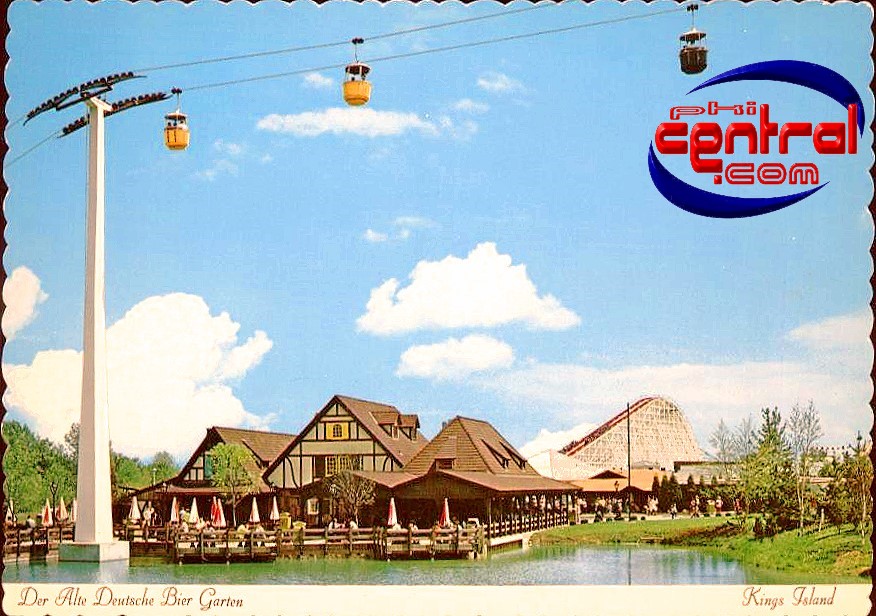 I was litterally just thinking this! would love to see a modern version of this. It was just too ambitious back in the day for such a tight layout. But it'd be doable now, with abit more air.

Does anyone have any pictures / footage of The Greatest Show On Earth from Blackpool?

Dan1989 said:
Does anyone have any pictures / footage of The Greatest Show On Earth from Blackpool?
Click to expand...

Pretty sure there's a POV of it on YouTube, if you just type in Blackpool Pleasure Beach Greatest Show On Earth.